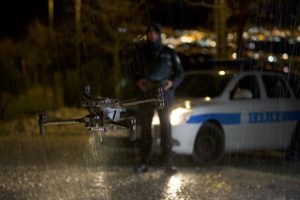 The following is a guest post by Christopher Todd, President of the AUVSI Florida Peninsula Chapter and the Executive Director of AIRT, Inc., the nation’s leading 501(c)3 non-profit organization supporting drones for emergency use and official home of DRONERESPONDERS.  DRONELIFE neither accepts nor makes payment for guest posts.

New research conducted by the Airborne International Response Team (AIRT), the leading 501(c)3 non-profit organization supporting the use of drones for public safety and disaster response and home to the DRONERESPONDERS program, has found that Florida public safety agencies and other government entitles who operate drones need more time to transition to recent legislative changes regulating government sUAS use.

During the first two-weeks of April, AIRT conducted a survey through the DRONERESPONDERS Florida Public Safety Coordination Group (FLOGRU) of 60 government entities who operate drones.  According to the data, 95% of respondents (58 out of 60) said they believe recent changes to Florida Statue 934.50 by the Florida Legislator will have a negative impact on their organization’s drone program over the foreseeable future.  A harrowing 87% of those respondents are predicting an “extremely negative impact” due to the change in legislation. 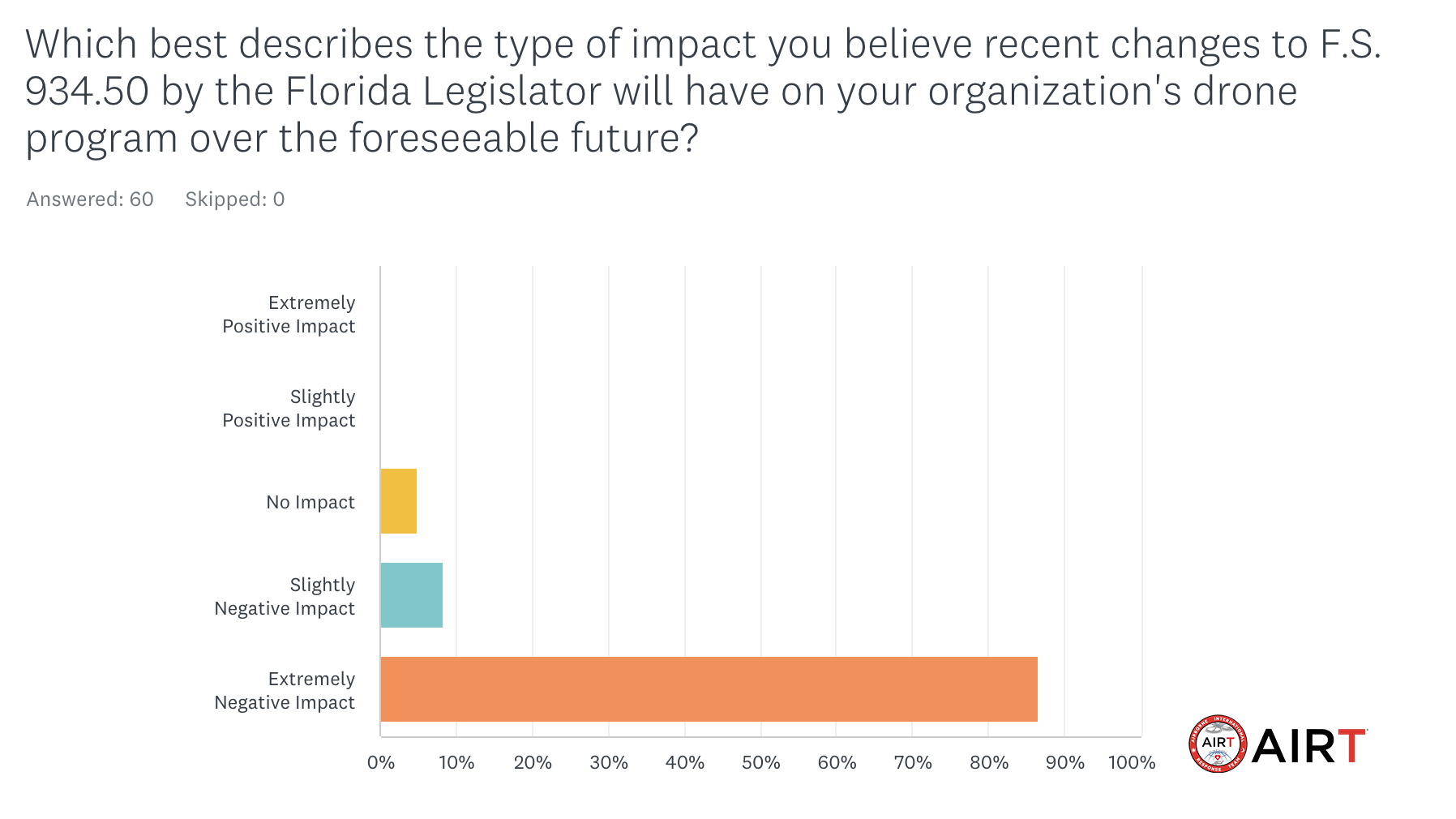 In 2021, the Florida Legislator approved Senate Bill 44 which instructed the Florida Department of Management Services (DMS) to create an “Approved Drone Manufacturers” list.  That list was published on December 31, 2021, causing great concern among Florida public safety agencies who had invested heavily in small, unmanned aircraft systems (sUAS) manufactured by DJI – a Chinese company that is the undisputed global leader in the sUAS market, but is perceived as a security threat by federal government agencies – particularly the Department of Defense.

According to AIRT’s research, 92% of Florida government drone programs are currently operating DJI drones as part of their fleet.  Autel, another Chinese manufacturer and the second-ranked sUAS manufacturer based on public safety fleet composition according to AIRT-DRONERESPONDERS 2021 research, is used by 22% of Florida government agencies.  Neither DJI nor Autel are presently listed as options on the Florida DMS Approved Drone Manufacturers list. 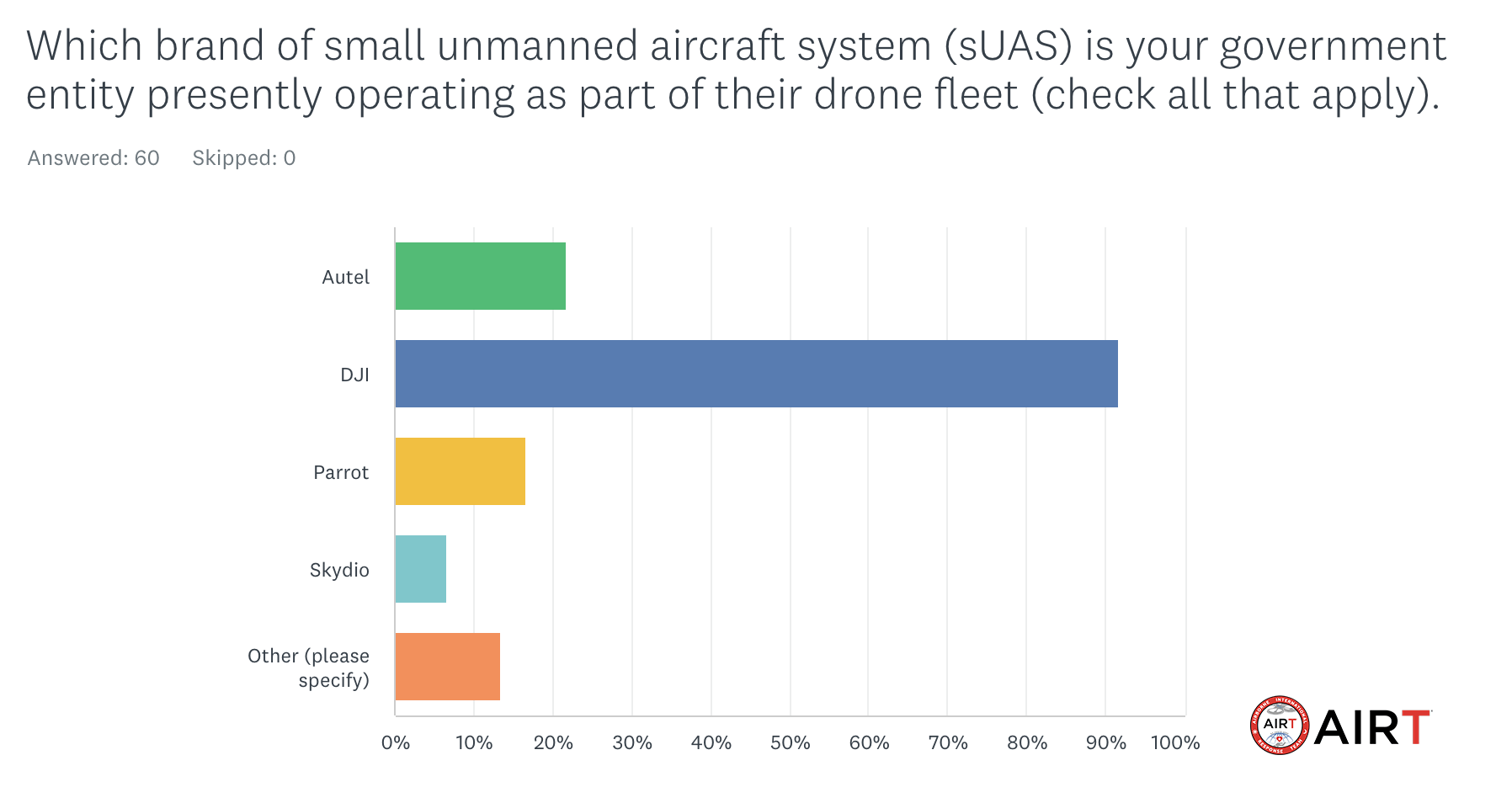 This has resulted in one of the most controversial debates that we have seen impact the public safety drone sector to date. Stakeholders everywhere are arguing whether this action is warranted from a security perspective.  But ultimately, the issue boils down to two key points: capabilities and funding.

The overwhelming majority of government agencies turned to DJI drones as they bootstrapped their sUAS programs into existence over the past several years.  The technology is relatively affordable and extremely capable for a commercial off-the-shelf (COTS) drone option.

Additionally, many public safety agencies applied for, and received, FAA airspace Certificates of Authorizations (COA’s) and operational waivers which were often based, in-part, on the capabilities of an sUAS to meet specific safety requirements described in the application process.  These applications were frequently submitted based on specific capabilities offered by DJI drones.  Now, program managers must audit their FAA COA and waiver authorizations in relation to the capabilities of the aircraft on the DMS approved drone list.

When you really get down into the weeds, this issue is far more complex than what the average layman perceives.  It is not just about the drones; it is about the entire ecosystem that surrounds the operation as well as the funding and regulatory authorizations, and safety requirements needed to support it.  Florida government agencies simply must have more time – and money – to properly plan and execute a transition of this magnitude.

Based on our recent survey data, AIRT is estimating the mean average of total funding invested by Florida government agencies into their combined drone programs to be at least $5.5 million.

This starts to shed light on why many of these government drone program managers are extremely frustrated.  They spent countless hours scaping up the necessary funding and working diligently to build their sUAS program.  Now they are essentially being told they need to go back and do it all over again.

During the most recent legislative session, Florida government drone users were hoping for some relief from the DMS drone list through Senate Bill 2512.  While expectations were initially optimistic, last-minute adjustments to the bill resulted in legislation that is expected to make the list more prescriptive, rather than providing opportunities to request waivers and provide the relief that many public safety agencies were seeking.

Let’s be honest, it is rather unlikely that Florida’s Legislator will completely reverse its stance on the approved drone manufacturers issue – which has bi-partisan support in Tallahassee.  However, common ground can be found to provide agencies with the relief they seek while solutions are developed to offer government operators the funding and technology needed to properly revamp their drone fleets.

Probably the easiest pathway to provide needed relief is to offer Florida government agencies the ability to request a waiver from the DMS to continue to use a sUAS that is not on the Florida Approved Drone Manufacturers list – as long as the public interest is protected.

According to AIRT’s data, over 93% of Florida agencies operating drones would support the ability to request a waiver from the Florida DMS to use drones not listed on the Approved Drone Manufacturers list.  The remaining 7% of agencies were unsure and needed more information on the topic. 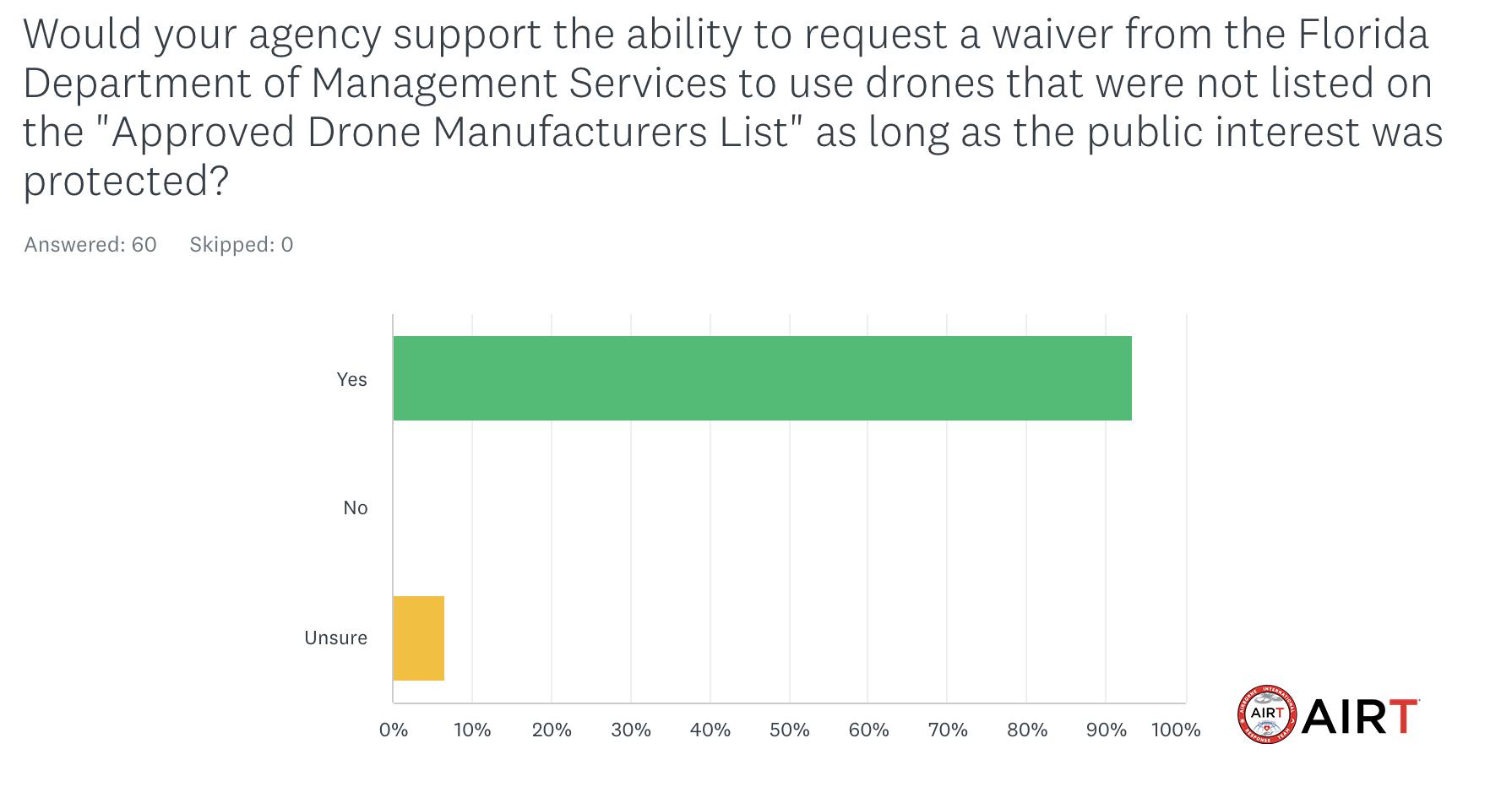 The waiver concept makes a ton of sense and is relatively simple; if government users are taking the necessary steps to ensure data security surrounding their operations, they could continually request an annual waiver from DMS to use specific drones until their service life expires.  This would allow agencies to continue to use the drones they have already purchased, trained with, and built their sUAS operations and tactics around, while also allowing industry more time to deliver an expanded portfolio of drone solutions into the marketplace.

When it comes to additional sUAS solutions, hope may be on the horizon.

The Defense Innovation Unit (DIU) is an organization within the Department or Defense (DoD) focused exclusively on fielding and scaling commercial technology across the U.S. Military at commercial speeds.  Several states, including Florida, appear to be leaning heavily on DIU’s Blue UAS program as a potential framework for helping to define their government drone operations.

The autonomy portfolio team at DIU is aware of the situation and they are working hard to expedite the pathway for Blue UAS technology to work its way through their system.  However, that team is a relatively small group with limited resources.  They can’t move mountains at the pace the drone industry would like them to.  That is upsetting some manufacturers and solutions providers. – and frustrating end users who want more U.S.-made technology options at reasonable prices that they can select from.”

And that brings us back to the dilemma that Florida public safety agencies and government drone users are presently facing.

Common ground must be found to help keep government drone operations in Florida running until a clear pathway is defined for public safety agencies to transition over to DMS-approved technology. Legislators and stakeholders must properly communicate with one another to better understand each position from a fact-based perspective.

To help jumpstart that conversation, FLOGRU will be hosting the DRONERESPONDERS Florida Public Safety Conclave at the Orange County Convention Center in Orlando from April 25-26.  The event will be co-located with AUVSI’s XPONENTIAL – the largest drone and uncrewed vehicle systems educational conference and technology exposition in North America.  Government drone program managers and remote pilots from around the State of Florida are expected to attend the Conclave.

The current plight of Florida government drone programs is a challenge that can be solved.  But it is ultimately going to require two-way communication, as well as that those who making the law to develop a more robust understanding of the ancillary nuances surrounding the technology and the regulations that encompass drone operations by public safety and other government agencies.

Read more about the Florida Statute and the Blue sUAS list: 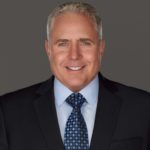 Christopher Todd is the President of the AUVSI Florida Peninsula Chapter and the Executive Director of AIRT, Inc., the nation’s leading 501(c)3 non-profit organization supporting drones for emergency use and official home of DRONERESPONDERS – the world’s fasted growing program advancing public safety use of unmanned aircraft systems (UAS).  Chris is a Certified Emergency Manager (CEM®) and FAA-certified Remote Pilot, who also works as an entrepreneur and consultant having helped grow billion-dollar companies in the technology industry.  He also serves on the advisory board for the Commercial UAV Expo.