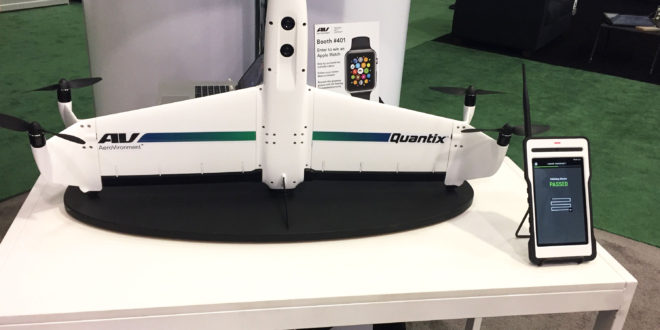 Can AeroVironment Compete in the Commercial Drone Market?

AeroVironment’s new drone and cloud-based analytics platform squarely targets the commercial sector, but are they targeting the wrong vertical, too late in the game?

Earlier this month, the military and tactical unmanned aircraft systems manufacturer AeroVironment (NASDAQ:AVAV) proudly unveiled its new QuantixTM drone and a cloud-based analytics platform called the AeroVironment Decision Support System (AV DSS™).  The combo is designed with the civil/commercial markets in mind. The drone is a hybrid design that enables the aircraft to launch vertically like a quadcopter and then transition itself for horizontal flight, taking advantage of a fixed-wing drone’s aerodynamic efficiency and range.  According to the company, the drone can map 400 acres in about 45 minutes, and its overall flight time is supposed to be an hour per battery.

The Quantix is a key piece to a larger end-to-end solution AeroVironment hopes will meet the needs of the agriculture, energy, and transportation industries, among others. Key to AeroVironment’s solution is a proprietary mobile interface that works with their secure cloud-based data storage.

WHAT’S COOL AND WHAT’S NOT

It’s great to finally see AeroVironment come out with an offering dedicated the commercial drones market.  While their Puma AE was used for aerial surveys in Alaska—and was the first time the FAA has authorized a commercial UAS operation over land, this product will be the first non-military product in their lineup. So, welcome. Or should I say—I’ll welcome you when you get here. Quantix won’t be available until Spring of 2017. And the price has yet to be announced.  However, in my conversations with the company at last month’s Drone World Expo, it’s clear some among their ranks understand it will need to be priced below $20K, or it’s simply not going to sell well.

It’s interesting that AeroVironment chose to target agricultural needs with its first commercial drone. At first glance, the drone looks well equipped for that, with RBG and multispectral cameras.  But, boy howdy, are they in for some heartburn when they discover they’ve targeted the most difficult sector to penetrate. We have written again and again about the challenges drone service providers have in providing clear ROI in agriculture (and how bad the forecasts are), but I guess that won’t stop manufactures like AeroVironment from thinking they will somehow buck the trend.

The other problem I see is that their new drone is a tail sitter. Tail-sitter drones are notoriously difficult to land in any wind.  I am not alone in this assessment; see another review here. We’ll see if their system is clever enough to compensate for wind gusts, but one thing is clear: there is nothing on the drone to assure a precision landing – no vision positioning system or sense-and-avoid technology in the tail other than a two antenna GPS system. That is so “2013,” and it puts their drone in the same category as a GoPro Karma, which drifts and lands “loud and drunk.”

Most of the companies that serve the precision agriculture market are small businesses. It was clear back in 2014 these companies were working hard to learn firsthand what farmers want from small drones. In doing so, they established networks of distributors and service providers that for the most part have locked other players out of the market.

Manufacturers of small drones for precision agriculture have long since consolidated around DJI and SenseFly because of their (or a third party’s) flight control, mission planning, data services software, and mainly their functional maturity and low cost.

The large aerospace companies and Department of Defense (DoD) contract vendors like AeroVironment do not have a presence in this sector. Even though some have participated in agricultural academic studies, those companies’ products as a whole are unknown in the farming community. They simply have not established the necessary relationships with growers, dealers, coops, agronomists, and local service providers.  As a result, it’s probably too late for them to capture any significant U.S. agriculture market share.

In my opinion, AeroVironment’s entry into the commercial markets is risky. For one, they are arriving late to the party. Second, the agriculture sector in particular—at least in the U.S.—is already set. I think Aerovironment is going to struggle to move customers from established vendors.

I worry that all this will take some time for them to realize. In the meantime, there is pressure for them to perform. For years, investors have hoped that the company would benefit from the rising interest in unmanned aerial vehicles. Indeed, the recent positive performance of their stock appears to have come in part from the rise in interest in drones due to a more favorable regulatory environment in the U.S.  But it remains to be seen whether this new offering will make a difference.  We’ll see.  In the meantime, join me in welcoming them to the party.