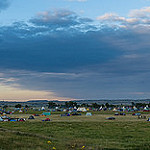 Since the story about the FAA’s Temporary Flight Restriction (TFR) over the Standing Rock Protests broke earlier this week with John Goglia’s piece in Forbes Magazine and Peter Sach’s Drone Law Journal article, the drone community has disagreed over how much responsibility the FAA has for the TFR’s it issues.   While the Forbes article queried whether the issuance of the TFR was a tacit position in the conflict, the FAA’s former Acting Administrator, Joe del Balzo, argues in this article (“The FAA is Not the Bad Guy at Standing Rock”) that the FAA is simply placed in a “ministerial position” of issuing TFR’s requested by law enforcement:

“The source of the request for this TFR has not been publicly identified. However, it is clear that the Department of Justice, the Department of the Army (Corps of Engineers), the Department of the Interior, the State of North Dakota and North Dakota Tactical Operation Center are the parties adverse to the protestors,” writes Del Balzo.  “The DoJ is the ultimate authority within the Executive Branch on the exercise of agency powers, including the FAA. If Justice requested the TFR, the FAA practically was placed in a ministerial position.”

Regardless of who is ultimately held accountable for the decision of enacting a TFR, the FAA is responsible for processing requests to fly in restricted airspace.  In response to DRONELIFE’s request for comment from the FAA about the TFR’s effect of creating a media blackout over the pipeline protest, the FAA stated that media drones were not prevented from flying with permission:

The TFR includes provisions for media to operate aircraft – both traditional and unmanned – inside the TFR, provided that operators comply with the language of the Notice to Airmen. In the case of unmanned aircraft, operators must also comply with the requirements of Part 107 and coordinate beforehand with the FAA. We’ve had no requests from media who meet those requirements.

It seems, however, that media who meet the requirements may be impossible to find.  A drone operator who chose to remain anonymous has released the response to his request to fly on social media.  The response, from Morton County Sheriff’s spokesman Rob Keller, was an unequivocal no.  “The Tactical Operations Center has reiterated that no drones will be allowed in the airspace referred below,” says the email, adding that the requestor is welcome to contact the FAA “for clarification.”  Given the request falls under the jurisdiction of the FAA, it is interesting that the response comes from the law enforcement agency directly.

As the situation at Standing Rock changes, the lack of reliable media coverage and the larger perspective that drones allow is a grave disservice to the public – regardless of who is responsible for it.