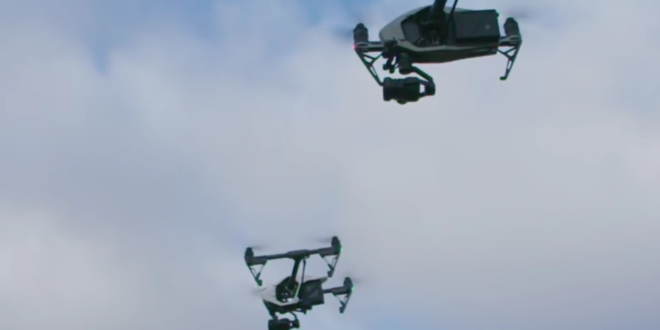 Watch: DJI Inspire Drones Battle it Out in Drag Race

Earlier this month DJI took what seems to be another big step ahead of the competition in the drone market. As well as releasing an upgraded Phantom 4 – the Phantom 4 Pro – the Chinese manufacturer launched a new drone in the Inspire range. Designed for the prosumer market and aerial photography professionals, the original Inspire was a huge success, despite lacking some of the sophisticated technology found in DJI’s more recent consumer models. An update was needed, and it’s fair to say that there has been a positive reception for the Inspire 2 so far.

It’s easy to look at the specifications and see how the Inspire 2 offers an upgrade on its predecessor. But sometimes it takes a more practical example to highlight the way things are moving forward in the drone business. That thought was what inspired the team at The Digital Circuit to come up with a more obvious way of comparing the two Inspire drones side by side.

Take a look at the video below, which features a straight up drag race between the Inspire 1 and the Inspire 2. The result is pretty much a forgone conclusion. After all, the Inspire 1 has a top speed of 49mph, with the Inspire 2 coming in at 67mph. But that doesn’t make the spectacle any less impressive…

Of course there are plenty of other differences between the two drones, and several ways in which the Inspire 2 will likely become the drone for aerial photography professionals in the coming months. As well as having sophisticated vision systems keeping pilots from crashing into objects directly in front or above the drone, the Inspire 2 is loaded with DJI’s latest features, including ActiveTrack and a smart return to home function.

We’ll be writing up a detailed comparison between the Inspire 1 and 2 in the coming weeks. In the meantime, here’s a short film from DJI called The Circle, which was shot entirely with an Inspire 2.