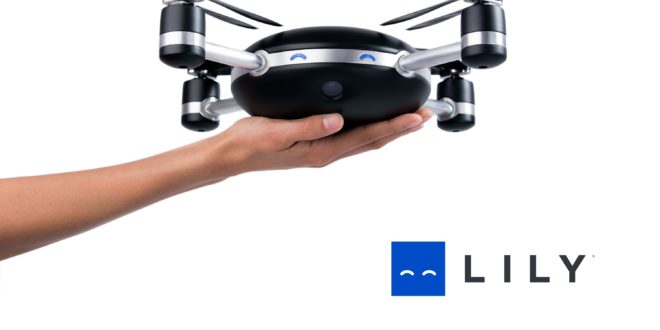 Did Lily Robotics Close Because They’re Being Sued? The Stor…

At one time, Lily Robotics was one of the darlings of the drone industry.

Back in 2015, Forbes wrote a short, glowing article about an sUAS camera drone that sounded a little magical, a lot amazing, and the good feeling presented in that article had generally persisted from that point on.

“The quadcopter flies itself and can follow you at speeds of up to 25 miles per hour at a height of 10 to 30 feet,” the article said.

The article also reported that Lily’s camera drone had three cameras (one camera to do the recording, one that looks at the user to visually track them, and another camera looking at the ground to make sure it’s stabilized), and could be controlled with a small device that fit into your pocket. And you could just throw it into the air to get it going. And it was waterproof.

But last week Lily Robotics announced that it was going to have to close it’s doors, despite $34 million in pre-orders.

And then rumors began flying around that many of the shots Lily used to promote their drone, and drive up all of those pre-orders, were in fact cribbed from the DJI Inspire and GoPro cameras, and weren’t taken by Lily Robotics’ drones at all. In fact, it looks like Lily may have closed because they are being sued, and not necessarily for the reasons they claimed when they made their announcement.

With all the information out there, it’s hard to sort out exactly what’s true and what’s just a product of the drone rumor mill. In this article we’ll do our best to tell the Lily story, explain why the company folded, and get to the bottom of the fraud rumors.

Want to skip the background and go straight to the fraud rumor and lawsuit fact-checking? Here you go.

The Early Promise of Lily Robotics

One of the early differentiating factors about Lily was that they were decidedly not trying to make waves in the drone market per se, but rather, they were trying to provide an innovative camera solution for general consumption.

What they wanted was a self-flying drone that could avoid obstacles on its own while filming a person in motion. That is, not so much a drone, but a highly intelligent, semi-autonomous camera, enabled by a drone.

As Lily co-founder Antoine Balaresque put it in an interview with Forbes:

“We want to be in the GoPro space, not the drone space. We don’t see this as a drone. This is robotics technology applied to cameras…To me, a drone is a military device that just flies around and shoots people. The only thing I see with Lily is a camera that flies. I guess it’s a matter of wording.”

Whatever you want to call it, the idea was revolutionary at the time: a drone you could fling in the air that would continue flying, use a GPS to track user movements and take pictures, with no need for a pilot steering the device.

Here is the video that started all the hype about Lily back in May of 2015:

This video is where the huge push for pre-orders really began. At a price of $499 via pre-order (as opposed to $999 for those who waited for it to hit the shelves), Lily seemed like miracle technology at a competitive price. And at a half-off, why not make the pre-order?

Just a hint: This is the video Lily is being accused of creating with the use of DJI and GoPro products. More on that in just a little bit.

So What the Heck Happened?

You’d think that $34 million amassed from 60,000 pre-ordered units would be plenty to ensure production and delivery. Think again.

On January 12th, 2017 (just about one week ago) Lily issued an announcement that stated:

“…we have been racing against a clock of ever-diminishing funds. Over the past few months, we have tried to secure financing in order to unlock our manufacturing line and ship our first units – but have been unable to do this.”

That one phrase—the inability to “secure financing in order to unlock our manufacturing line”—is the only concrete explanation provided in the announcement for why the company is closing its doors.

Trouble could have been noted as long ago as December of 2015, when Lily pushed back their launch date to the summer of 2016, and then again in August of 2016, when they yet again punted the release to early 2017.

But how in the world could a company that already has $34 million in pre-orders and at least $14 million more in funding still need yet more money just to actually make the drones they built a company around?

And to that the fact that it seems they not only did not have enough funds, but they were actually seeking $15 million more just to build the drones they had pre-sold.

Information on what specifically went wrong is still somewhat scarce, but based on their own announcement we can deduce that they basically got ahead of themselves. Like 3D Robotics, who essentially lost their bid in the commercial sector by overcommitting to orders before they had the funds to create the hardware needed to fulfill the orders, Lily sunk so much into R&D and overhead that they couldn’t deliver the drones they had promised people.

Some of the best analysis we’ve seen on what the problems could have been came from Tekla Perry writing for IEE Spectrum, who speculates:

The most likely reason [Lily failed] may simply be that Lily couldn’t run fast enough to stay ahead of the pack. The company is no longer the only flying camera out there: other drones have been demonstrated that can be tossed into the air, self-stabilize, and follow a selected subject, like the Hover camera, from Zero Zero Robotics.

[Or] maybe the company burned money too fast…Or maybe software problems did it in; at the time of the delay announcement, Lily’s then-head of communications Kelly Coyne told me the problem was with the flight controls.

Or maybe it was all of these reasons combined.

Regardless, it seems safe to say that all of the millions of dollars pouring in seems to have given Lily’s founders a false sense of confidence about their ability to deliver, even if the math didn’t add up. Because one important piece of the equation is that, if you’re pre-selling your product for 50% off (that is, $499 instead of $999), your profit margin is going to be much, much smaller. And if you don’t cap your pre-sales (and instead let them soar to a whopping 60,000 units, which is really a mind blowing number), well, there goes the bulk of your potential profit.

A week after the initial announcement that Lily would be closing its doors, the story has taken a more sinister tone, with rumors flying around that they intentionally committed fraud to bring in all those pre-orders.

Here’s some fact checking we’ve done regarding those rumors:

Rumor: Lily Robotics is under investigation by Indiegogo’s Trust and Safety team.

According to this article from DroneOn (and despite rumors that appeared in sUAS News to the contrary), Lily Robotics never used Indiegogo as part of it’s pre-order efforts.

According to Kelly Coyne, Lily’s Head of Communications:

“The official Lily Camera is available for pre-order exclusively from our website, www.lily.camera. We did not partner with any crowdfunding platforms such as Indiegogo or Kickstarter for our pre-order campaign. Several months ago, a fake page popped up on Indiegogo.”

Rumor: Lily Robotics co-founders have fled the country and plan to keep the pre-order money collected.

Conclusion: False. This rumor has popped up in different drone-related forums, but no real reporting has been done backing up the claims.

Rumor: Lily Robotics used products from DJI and GoPro to create promotional materials and claimed the materials had been made by Lily products.

Apparently the San Francisco DA has filed a lawsuit alleging that Lily “engaged in false advertising and unfair business practices.”

Remember that spectacular promotional video included a little above, which has over 12 million views? Well, according to an article in S.F.-based news source SFGate, the DA is accusing Lily of using the DJI Inspire and GoPro cameras to shoot parts of the video, thus misleading people regarding what Lily was actually capable of doing.

“After conducting what it said was a months-long investigation, the [S.F. District Attorney’s] office alleged that Lily lured customers with a promotional video that was actually filmed by a “’much more expensive, professional camera drone that requires two people to operate.’”

We dug deeper, and found this story substantiated by The Guardian and the SF Business Times. Here is a quote from the Guardian article:

“According to emails quoted in the complaint, other footage was shot using a GoPro camera mounted to a Lily prototype. In the emails, the company’s co-founder Antoine Balaresque expresses concern that viewers could be able to tell.

‘I am worried that a lens geek could study our images up close and detect the unique GoPro lens footprint,’ the complaint quotes him as saying. ‘But I am just speculating here: I don’t know much about lenses but I think we should be extremely careful if we decide to lie publicly.’”

So Why Did Lily Really Close It’s Doors?

It turns out the lawsuit filed by the San Francisco D.A. came out the day after Lily Robotics issued their announcement about shutting down operations and issuing refunds. Just think about that for a moment. The law suit was filed the day after they announced they were closing.

Now, we’re not big on conspiracy theories, but it seems to us that there might be a smoking gun here. That is, that Lily closed because they knew the news was about to break that they had intentionally misled all of those folks who had placed preorders.

That being said, it’s still unclear where the truth lies. Lily might be innocent of the allegations. After all, right now all we know is that there is a case against them, not how the case will be decided.

As the drone industry continues at its insanely rapid pace, there are sure to be more Lily’s that crop up. Companies with huge promise that, for one reason or another, just can’t deliver on the great idea that rocketed them to the front of people’s minds.