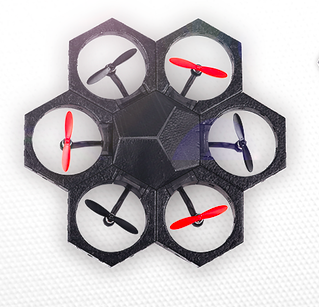 The Drone that can turn into a hovercraft, a car and much more! Your drone crashes, breaks into pieces, sad day right? Well… no, not with Airblock! This small drone is all covered in styrofoam and assemble it back together after crashing. Manufactured by Shenzhen-based robotics startup Makeblock, it is the company’s third Kickstarter project. After the first two being a success, Makeblock designed Airblock, the first modular and programmable drone that turns into a hovercraft. The Kickstarter project received all the necessary funds in just 24 hours and it aims to be another success for both kids and adults.

How does Airblock modular design work? Airblock becomes what you want it to be

Airblock is completely protected by a type of material that absorbs the impact of crashes and hits. The drone’s central processor, motors, and rotors are all surrounded by a soft styrofoam frame. The rotor and motor pieces fit together using magnetic connectors. It supports up to six of this pieces at same time, but it does not require all six to fly. In fact, you can easily detach two of the pieces and turn the hexacopter (six motors) into a quadcopter (four motors); remove another and it becomes a tricopter (three motors). But the fun doesn’t stop here, the limit is your imagination. Play around with the pieces and other types of styrofoam bases and Airblock becomes more than a flying drone. Airblock easily adapts to pilot’s needs, you can even use legos and other kinds of material. Yes. The app software (available for Android and iOS) provides an easy to understand user interface which allows the user to code functions and create a flight path. Users can program functions such as Circle, Spiral, Landing, Hover, and S-Curve. This functions and flight paths are easy to code, thanks to simple visual programming, a programming language that uses graphic elements instead of text. This allows children and adults of all ages to create their own stunts without any hassle. The same app enables pilot to control the drone, it does not come with its own controller, instead it makes use of user’s smartphone or tablet device.

What did you think of Airblock? Is it a safe learning drone for a kid? Could be this ideal drone to learn how to fly? Let us know in the comment section below, we at Dronelife are always happy to read your opinion.