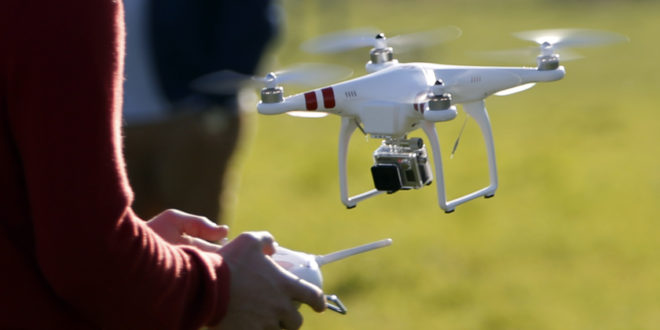 A pilot flies a Phantom drone by DJI company at the 4th Intergalactic Meeting of Phantom's Pilots (MIPP) in an open secure area in the Bois de Boulogne, western Paris, March 16, 2014. Drone operators in France are required to complete a training course to fly an unmanned aerial vehicle and also receive written approval for flights in urban areas. Picture taken March 16, 2014. REUTERS/Charles Platiau

There are plenty of reasons that you might be considering getting into aerial photography. You might’ve been inspired by some epic drone footage – of which there’s plenty – fancy yourself a professional pilot in the making, or just want an excuse to get out of the house. Whatever your motivation, the idea of actually buying a drone and getting started can be pretty daunting. That’s why we’ve put together a quick list of top tips for aerial photography beginners for you to take away, think about some more and use to help get your new hobby off the ground.

This is a pretty obvious one to start with. There’s a huge range of drones available on the consumer market, from small toys to professional-grade photography equipment. As with most things in life, you get what you pay for. If you want grainy footage and a flight time more easily counted in seconds than in minutes, that’s easy enough to find. But you probably don’t want that. Even beginners to the field of aerial photography would be well advised to stick with the established manufacturers who have earned their reputations as the go-to providers of aerial photography drones. Most of them have products to suit a range of budgets.

The GoPro Karma: There are plenty of drones out there to suit all budgets and aspirations.

The market leader is by far and away DJI, whose Phantom range has set the standard for consumer drones. Going back a couple of years, DJI’s Phantom 3 Standard is now available for under $500, while the Chinese manufacturer’s new, vastly superior Mavic Pro is retailing at double that. For a beginner, the Phantom 3 is, on the face of it, the perfect place to start. It’s a great balance between price and quality. But bear in mind that things have moved on incredibly quickly in the industry since it was first released in the summer of 2015. In fact, while a newer drone such as the Mavic Pro may be more expensive and appear more complex, the increased sophistication of the latest drones arguably makes them a whole lot easier to fly straight out of the box. They are generally easier to control once up in the air as well, and can of course produce higher quality results.

The right drone for you will depend on two things: 1. What’s your drone really for? And 2. How much are you willing to spend to make this happen? The point of your drone is the first thing you should be considering. What are you going to be using it for? What level of image quality are you expecting? How much hands-on flying do you want to be doing? Are autonomous flight modes important to you? Are you bothered about built-in safety features, or do you want to don a pair of FPV goggles and just leave reality behind? Consider the answers to these questions when choosing your first drone. The Parrot Disco is fantastic for FPV flyers.

The latest tech from DJI, Yuneec, 3DR, GoPro or Parrot might do a whole bunch of things you’re never going to need or even appreciate. You might even be the kind of person who lets the latest gadgets gather dust in the attic after an hour of use. If either of these is ringing true, then the above manufacturers – with the exception of GoPro – offer drones across the price spectrum, so you can find the balance between cost and reward that best suits your expectations and expected use.

If you’re in the enviable position of having zero restrictions when it comes to budget: GoPro fans will enjoy the Karma and its seamless integration with the camera company’s other products, pilots looking for a first person view experience should try out the Parrot Disco, and aerial photographers keen on an all-round package should look no further than DJI’s Mavic Pro or Phantom 4, along with Yuneec’s Typhoon H.f all the top tips for aerial

Of all the tips for aerial photography beginners that we can think of, choosing the right drone has to be number one.

Harness the power of autonomous flight

While the idea of putting a high-quality camera in the sky sounds like a dream come true for keen photographers, it’s not always been straightforward to pilot a drone effectively and shoot great footage at the same time. A focus on one can often be to the detriment of the other. Fortunately, manufacturers across the board have made great strides and are now much closer to solving this fundamental issue.

Essentially, autonomous flight modes mean that you’re only ever a click away from becoming the Steven Speilberg of the skies. With most of the manufacturers mentioned so far, you can draw custom flight paths, have your drone orbit a certain location, and perform classic aerial photography maneuvers to mimic a cable camera or slowly zoom out or into a location. With the top-end drones you can be both pilot and star of the show; why not have your drone track you and keep you in shot? Yuneec’s Typhoon H is one drone that takes autonomous flight to the next level with built-in obstacle avoidance.

Autonomous flight is one area of drone photography that’s fast becoming both an essential and an assumed feature of any new consumer model. These manufacturers want to appeal to as broad an audience as possible. As a result, the latest drones are a lot less daunting to fly and get great results with less input than you might think.

Several manufacturers, such as DJI, offer the ability to control the camera separately from the drone itself. The GoPro Passenger app for the Karma is a perfect example of this burgeoning concept. You can pilot the drone while your ‘passenger’ takes control of the camera and handles the photography independently. Most of the latest drones can also be used with FPV goggles, so your or a copilot can enjoy an immersive view while you fly.

There’s no doubt that a significant percentage of the general public remain skeptical about the rise of consumer drones. As a new pilot, you owe it to yourself, your fellow citizens and the wider flying community to fly responsibly and well away from established no-fly zones. Typically, these are anywhere near airports, at altitudes above 400ft and in National Parks – You can check your nearest no-fly zones through a number of apps, or on the FAA website. Manufacturers are also starting to introduce software that stops you from flying where you shouldn’t, such as DJI.

There are also plenty of applications and growing communities dedicated to sharing tips on great flying locations, such as Where2Fly.

Next in our rundown of top tips for aerial photography beginners is something you might not have thought of yet. Your drone is probably going to set you back a few bucks, so it’s probably a good idea to sort out some insurance. Crashes happen, and with new pilots it’s often a case of when, not if. Insurance is also a good idea if you’re flying anywhere near others (which you shouldn’t really be doing) or their property. With providers such as Verifly you can arrange cover on a flight by flight basis. It’s not a legal requirement, but it might be a good idea for peace of mind, keeping you covered in the worst-case scenario that something does go horribly wrong. If you’re piloting skills really take off and you end up flying for a living, insurance is highly recommended.

The last point in our list of tips for aerial photography beginners concerns what you do once all the excitement is over. Having spent a day taking to the skies and shooting video in a way you’ve never been able to before, it’s easy to forget that there’s an end result here: the footage itself. Whether you just want to watch it back with friends and family, capture a special occasion or share it on social media, editing and polishing your footage is an absolute must.

We recently featured a range of software to get the best out of your aerial photography. Many manufacturers, such as GoPro, offer a suite of services to help with post-production. With a few clicks you can add backing tracks, cut out the boring bits and generally make your videos a whole lot more professional.

Editing footage is a great way to relive the moment, but it’s also vital to making the most of what you’ve captured. Check out the links above and search around to find some video editing software that suits your needs and ability.