3DR Pivots to Construction Industry with Help from Autodesk 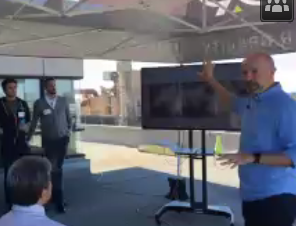 In advance of a new product announcement scheduled for today, Chris Anderson, CEO of 3DR, hosted a media event yesterday in which he provided an overview of 3DR’s primary focus going forward, performed a demonstration of capability, and fielded questions. In short, 3DR is focusing its efforts on providing easy-to-use solutions to the construction industry.

To illustrate ease of use, Mr. Anderson invited a member of the press to come up during his demonstration to map the flight path of a drone using a finger on an iPad. The user traced the outline of a sand pile at a nearby location, and that was it. The drone took off, oriented itself, and then flew the path defined, photographing the site. The drone was a 3DR Solo outfitted with a Sony camera. The drone, upon completing the survey, returned and landed automatically from its take off point; the data were then synced with the iPad and stored to the cloud for processing by Autodesk, where output would include an ortho-rectified image of the site.

Anderson explained that the focus is on the construction industry for several reasons. First, it addresses a solvable problem. “There is construction is all around you, ” Anderson said, “but they are still living largely in the paper era. There is a  need to digitize the construction industry .  .  . to digitize the site itself.” Second, construction sites are controlled environments in which the land is privately owned by the client, so there are no privacy concerns. And it is an industry that lends itself to measurement. Third, and perhaps most significantly, 3DR is leveraging its relationship with Autodesk, an investor.

3DR integrates with Autodesk, and as Autodesk has a CAD concentration on the construction industry, it was logical for 3DR to follow suit. The result is an impressive tool that overlays a CAD drawing on an actual construction site. In doing so, it can illustrate possible construction flaws that otherwise could not be identified or would cost time and money by the time problems manifested themselves. As an example, they walked through a scenario where a construction overpour was identified and corrected. The error was identified by overlaying the CAD onto the drone-supplied imagery of the site. Construction managers can now compare the site as designed with the site as it is built. This service, which Anderson referred to as Building Information Modeling (BIM), will be featured within 3DR’s Site Scan. You can learn more about BIM here.

A goal Anderson identified was to manage the physical world in a manner similar to which we manage the internet. Drones can put sensors (e.g. cameras) where they are needed. 3DR adds software to the drone and puts it in the air where it captures data. Data analysis can reveal changes it has detected, which in turn can prescribe actions to be taken.

The service, which will be announced shortly, will come as a combined hardware / software solution. Inquiries by DroneLife regarding pricing of the service went unanswered.

This is 3DR’s third pivot. The got their start with providing technology and guidance  to DIY drone community. This morphed into a consumer play. Now they are pivoting to the commercial space with a specific focus on construction. Asked if this was a “Hail Mary pivot” from the consumer to the commercial, Anderson said that it was necessary to go through the consumer to get to the commercial and that it was a path that many companies have taken. With the release of Part 107 by the FAA, it has become easier for commercial enterprises to enter the drone space and adopt the technology. Anderson also noted that 3DR has been in the commercial / enterprise space longer than some competitors such as DroneDeploy, a company that provides cloud-based analysis for drone-captured data in the areas of agriculture,  construction, and mining.

In addressing a question regarding financing, Anderson said the company was well backed by Autodesk and Qualcomm among others. Most recently, 3DR received $27 million last June from an undisclosed source. When questioned about cuts in staff, Anderson said that most of those were due to contracting out manufacturing.

In response to a question about expanding into oil and gas inspections, Anderson said the focus now is on construction. and this direction is in large part a result of Autodesk’s strength.

Anderson said that 3DR is now a software company targeting the enterprise market. It is a significant shift. He acknowledged that target=”_blank”>DJI is a great company and competing with them in the hardware space is a challenge. Whether 3DR will have better luck in the drone software space is to be determined. There are already formidable firms in that area; Kespry, PrecisionHawk, DroneDeploy, and Airware all target industries in the enterprise market. 3DR is seeking to differentiate itself with some fairly cool technology. Their drone is a solid product. It is now married to a Sony R10C camera, which is a high end imaging device ,and with the Autodesk integration the complete package delivers a compelling service that is unique in its ability to marry CAD design with construction site imagery. However, 3DR is hardly unique in its 3D modeling and ease of use in flight planning. This may be a less bumpy ride for 3DR but there is no guarantee of a completely smooth flight.

Previous Dial a Drone to Walk You Home: UK Insurance Co Introduces “F…
Next 7 Key Improvements Being Made to Drone Technology