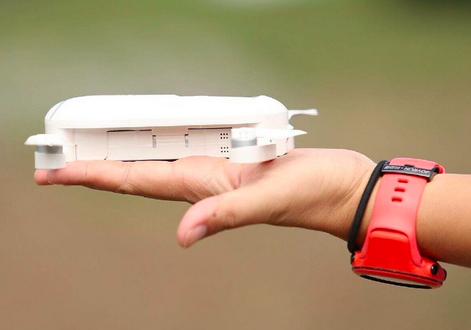 ZEROTECH Brings the Dobby, to the North America

With regard to the blossoming crop of selfie drones – it seems to tbe “Anything you can do, I can do better. Yesterday we covered Airselfie’s Kickstarter campaign. Today ZEROTECH, a supplier of smart drones, announced the availability of the DOBBY, a pocket-sized selfie drone for everyone, in Canada and the US. The DOBBY has a uniquely small footprint that folds up and fits in the user’s pocket. What ZEROTECH has done better is actually launch their product.

DOBBY can fly as far as 100 meters away and fly up to 50 meters above the ground. It’s small design packs best-in-class technologies that have been inherited from ZEROTECH’s nine years of experience in the drone industry, including professional target following and face-tracking functions.

The 10-second auto pull-away short video and 75 degree no-distortion lens enable aerial selfies with your friends and family from a bird’s-eye view. With its inbuilt tutorials for beginners, DOBBY empowers everyone to master aerial photography within five minutes. Control of the DOBBY is also in the palm of the user’s hand, via a smartphone app. And photos and videos can be instantly uploaded to social media with a single click.

Following its initial launch at IFA 2016, DOBBY is now available for purchase in-store and online at BestBuy, Amazon, Adorama and B&H Photo in the United States, at a suggested retail price of USD399 / EUR469. It’s also available at Staples and NCIX in Canada. In addtion to the DOBBY pocket drone, ZEROTECH has already built up a network of global partners to expand its business.

“At ZEROTECH we believe that technology is fundamental to enabling a better world and we are partnering with China-based, as well as the world’s leading internet technology pioneers to bring life-changing ideas to reality,” said Yang Jianjun, Chief Executive Officer of ZEROTECH. “Our experience and insight into cutting-edge drone technology will open up new experiences to people around the world.”

ZEROTECH will combine its experience in UAV technologies with the vast online networks of its partners to bring innovative drone experiences to more consumers around the world. Tencent’s Wechat drone is one of the drones supported by ZEROTECH’s leading technology.

We reported on the DOBBY in a previous post you can find here and expect to publish a first look and review shortly.