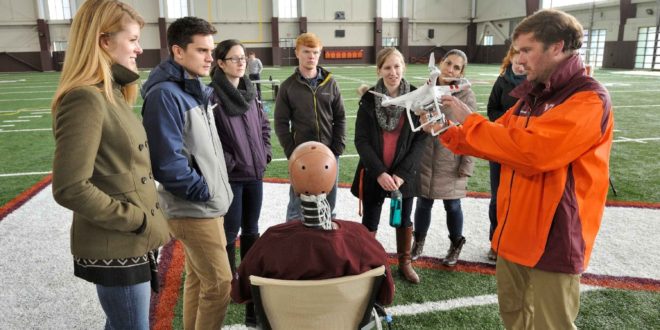 Why Are Researchers Crashing Drones Into Dummies?

The sight of a crash-test dummy being pummeled from the air by a rogue drone may alarm a casual observer; but for researchers at Virginia Tech University, it’s all in a day’s work to improve air safety.

The VTU research team recently launched a program, in cooperation with the FAA, to apply the latest in biomechanical research to determine what safety risk a falling drone may pose to people during direct fly-overs. Researchers are conducting the tests at the Mid-Atlantic Aviation Partnership’s Unmanned Aircraft Systems test site program; one of seven U.S. test sites.

An FAA proposal could eventually allow some drones to fly over people but the agency wants to determine risk factors before approving new rules.

“The majority of [drone] applications would be much more effective if they weren’t restricted from operating over people, but you have to demonstrate that it can be done safely,”  Virginia Tech Mid-Atlantic Aviation Partnership Director Mark Blanks said in a VTU press release.

Key parts of the test were developed by VTU’s Institute for Critical Technology and Applied Science. The research team crash drones into a test dummy, which is equipped with sensors in its neck and head that measure generated force.

VTU professors Stefan Duma and Steven Rowson developed protocols and special equipment that measure and simulate head impacts and can assess injury risks much in the same way as in automotive engineering, athletics, and consumer products.

“We can get a good idea of what the kinematics are and correlate that to different rates of injury, whether it’s skull fracture, brain injury, or neck injury,” Rowson said.

Other parts of the project will involve simulating impacts in the lab and conducting drop tests, which can measure the force exerted by a falling aircraft. This comprehensive experimental protocol will allow the team to study injury risk in a variety of possible impact scenarios.

“There’s a lot that you can do — bumpers, enclosed rotors, airbags — but you have to put in the research,” said John Coggin, the chief engineer at the Mid-Atlantic Aviation Partnership.

“This testing gives us a route to not only determining whether a particular aircraft is safe, but also making aircraft safer than they currently are,” Blanks said.

Share
Previous 14 YO Gujarati Boy Lands Gov Deal to Produce Land Mine Detec…
Next What Can We Expect From DRL in 2017?