As 2017 gets underway, many drone racing fans will be wondering what the future holds for the self-proclaimed ‘sport of the future’. 2016 will go down as the year that DRL helped guide drone racing toward the mainstream. The next twelve months will define whether it establishes itself there or fades into the background.

Here is some of the biggest drone racing news and event info that we’re expecting from DRL in 2017.

DRL (Drone Racing League) had a pretty huge 2016. As well as growing the sport’s exposure through a series of skilfully edited racing episodes across the USA, the media company/FPV Racing organization eventually signed multi-million dollar broadcasting deals with TV stations around the world, including ESPN and Sky.

This year we are expecting plenty more where that came from:

Anyone can download the DRL simulator and give FPV racing a try.

So as well as building a successful drone racing organization, DRL has found the time to develop an FPV simulator that anyone can download and try out for free. The simulator features some of the courses from the 2016 season, along with online multiplayer so pilots can battle it out against competitors from all over the world. Want to have a go? You can download the simulator here.

DRL will hold tryouts in January

So many pilots around the world will have watched the first season of DRL’s FPV racing and thought, “How can I get involved with that?”

Well it turns out the simulator will actually been used by DRL to select a new pilot for the 2017 season. Seriously. On January 21st (this weekend) the top 24 qualifying pilots from the simulator tryouts are getting together in New York City for a competition (there will also be a live DJ and a Bud Light bar) that will see the winner receive a $75,000 professional drone racing contract.

DRL to launch its own range of racing drones

It figures. The Drone Racing League had to build its own custom drones for its elite competition. Now they’ve partnered with Toy State to produce a co-branded racing drone for Toy State’s drone line, Nikko Air. The drones will be available in stores in the fall of 2017.

“We’re incredibly excited to develop the Nikko Air DRL Drones with Toy State and inspire the next generation of elite drone pilots,” said DRL founder Nicholas Horbaczewski. “Nikko is the most respected name in RC vehicles and partnering with them as they introduce this new line of flying RC toys into the market is a natural fit for us. Young fans watching DRL on ESPN and Sky Sports who want to be like their favorite DRL pilots will have an unprecedented opportunity next year to experience the thrill at home.”

The DRL 2017 Season to Culminate in London 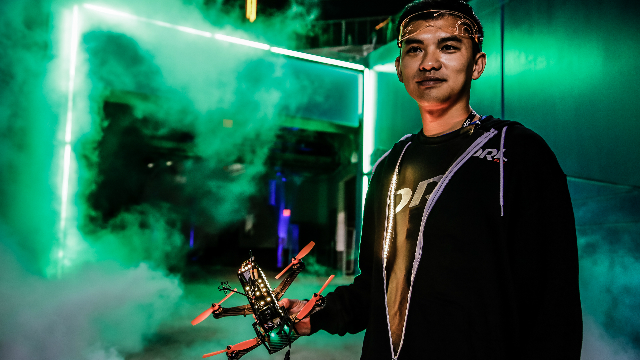 Oh, and DRL will also have some actual drone racing later this year too. As we mentioned last year, as part of the deal with broadcasters from around the world, DRL is set to go on the road in 2017.

The race venues haven’t been announced yet. But what we do know is that DRL will take its elite race series to London for their championship event, which will be hosted at London’s iconic Alexandra Palace on 13 June. 8 pilots will compete to be crowned the ‘best in the world’ during the winner-take-all 2017 season finale.

DRL founder Nicholas Horbaczewski said “With a rapidly growing fanbase in London and throughout the UK and the rest of Europe, we felt it was critical to find a venue and a partner locally for an iconic 2017 race. As an official event of London Tech Week, we have an incredible opportunity to deliver the sport of the future directly to one of the most creative and innovative tech communities in the world.”

It’s clear that DRL is going to keep pushing FPV technology further in its effort to bring drone racing to the masses. There are currently few competitors that can match it in terms of spectacle or scale.

The only problem we can foresee is due to the fact that, in signing big-money deals with broadcasters around the world, the company no longer publishes race episodes on its website or social media platforms. It’s now essentially a pay-to-view sport. Previously DRL’s accessibility is what helped it gain a huge amount of traction in both drone circles and among the wider public. It remains to be seen whether TV audiences will be as loyal in the long run.

Either way, we can’t wait for the 2017 season to get underway.

Share
Previous Why Are Researchers Crashing Drones Into Dummies?
Next FAA and SkyPan International Reach Settlement on Drone Fine