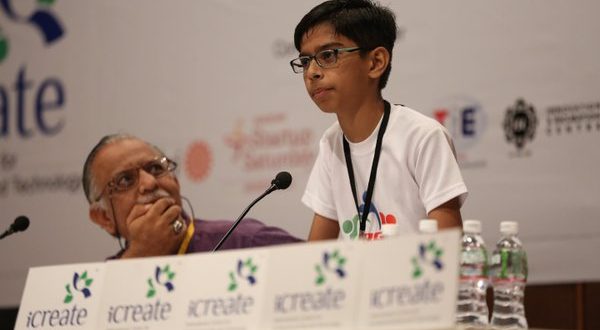 A 14 year old Gujarati boy has signed a Memorandum of Understanding with the state government’s Department of Science and Technology to produce the landmine-detecting drone he designed.

Harshwardhan Zala was present at the Vibrant Gujarat Global Summit to sign the deal yesterday.  Zala has already filed a patent and created 3 prototypes of the drone, which he started working on last year.  He has also started his own company, Aerobotics, and developed a business plan.

“The inspiration struck when I was watching television and learned that a large number of soldiers succumb to injuries sustained due to landmine blasts while defusing them manually,”  the 14-year-old said, report The Times of India.  The teen’s parents paid for the production of the first two prototypes, but he received a grant from the state to develop the third.

“The drone has been equipped with infrared, RGB sensor and thermal meter along with a 21-megapixel camera with a mechanical shutter that can take high resolution pictures as well,” explained Zala. “The drone also carries a bomb weighing 50 gram that can be used to destroy the landmine.”

The drone will fly 2 feet above the surface and send out waves that will detect land mines and communicate their location with a base station.  “I started making drones on my own and set up an interface with a base station but realised I need to do more. So I fixed payloads that detect landmines. I have several other plans that I want to execute once the patent for this drone is registered,” Zala says.

Zala was encouraged to get his product patented during an all-expenses paid trip to Google headquarters in the US as a prize won during an innovation event at LD College of Engineering.   The teen discussed his ideas with investors at Google during the trip and hopes that they can be convinced to invest in his company now that he has signed the MOU with the state government.

Share
Previous Vigilant Aerospace Releases List of Commercial Drones for BV…
Next Why Are Researchers Crashing Drones Into Dummies?