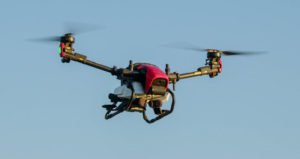 XAG V40 Agricultural Drone operated with broadcast system on board

The leaders in the commercial space offer some surprises.  #1 is the dominant global leader DJI: no surprise to anyone familiar with reports that place DJI’s market share at anywhere from 65% to 85% or greater.

With ramped up competition all around the world, the #2 position may have been a closer race.  Parrot, however, has been in the game for a long time: and with recent innovative releases including the ANAFI Ai, they’ve made it to the second spot. “Despite difficult years with staff layoffs and continued sales declines, Parrot Drones, as part of the Parrot Group, remains one of the world’s most prominent drone manufacturers,” Lotfi writes. “Like many other manufacturers, Parrot is using the opportunity in the U.S. to offer their products to governmental entities (like the U.S. Army or the Defences Innovation Unit) to replace DJI products.”

The third place may be a surprise to those outside of the agricultural sector.  Chinese company Xag focuses on precision ag and crop spraying drones. “They started to develop crop-dusting drones in 2013, and by now they own more than half of China’s market for agricultural drones,” writes Lotfi.

Today, Xag announced that they were launching their V40 and P40 Agricultural Drones globally: “bringing digital agriculture into more rural areas with aging population and weak infrastructure,” says the release. “The XAG V40 and P40 are fully autonomous drones that can conduct mapping, spraying, and broadcast on farm. They are designed in supporting farmers’ transition to climate smart practices, driving greater growth with lower carbon footprints and less agrochemical.”

Share
Previous Will Automation Create More Jobs than it Eliminates?
Next Biden administration wrestles with selling armed drones to I…