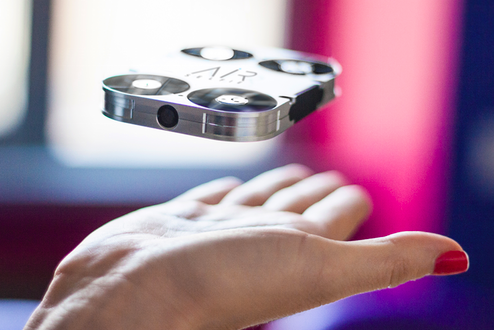 A London firm has blown past its Kickstarter fundraising goal of ~$50,000; raising $101,631 in 5 days. It is an impressive bit of marketing that indicates people a) continue to have an unquenchable desire to look at themselves and b) invest in an untested device that has yet to go into production. Their product, dubbed the AirSelfie (which may also be the name of the company), is a miniature quadcopter, its blades protected with safety guards, that is small enough to fit in your pocket. The 5MP camera takes photos and records videos from up to 20m (66ft).

The company is offering the AirSelfie at a reduced price of $249, with two units costing $478. Pre-ordered units are expected to ship in March 2017.

Airselfie developed the prototype with a $3M investment. According to their release, it is “the only portable flying camera that integrates with smartphones.” That may depend on how one defines portable. The Dobby from Zerotech and the Breeze from Yuneec are also portable drones designed with selfie’s in mind and use a smartphone as the controller. There is also the Phone Drone from Xcraft with is portable and is about as integrated with a smartphone as a drone could be. All these products are attempting to crack the nut of delivering a easy to use drone that can capture quality selfies at an affordable price. Will this be the one? They’ll need to bring it to market first; but here is some info on it.

The AirSelfie is actually smaller than a smartphone and can fly vertically up to 66 feet, allowing users to take aerial selfies of themselves and their friends. The device connects to the most popular smartphones, including iPhone (6, 6s, 7 and 7 Plus), Huawei P9, Google Pixel and Samsung Galaxy S7 Edge. The device includes self-generated WiFi and comes equipped with a rechargeable battery through a cell phone case, as well as the option to purchase an external power bank. Additionally, a vibration-absorber system and in-flight stability systems guarantee stable, clear, flowing images.

“Our team of 60 seasoned technology professionals and enthusiasts researched, designed and created a flying camera that exceeds all current standards,” said Edoardo Stroppiana, co-founder of AirSelfie. “We saw an increasing need for a device that goes beyond a selfie stick, allowing users to take pictures from all angles, and we’re excited to introduce AirSelfie to Millennials and consumers around the world. It sets a completely new bar for the market.”

The company states that “Production of the gadget will begin once the threshold of $50,000 is reached. After the first 1,000 AirSelfies have sold, the company will produce another 2,000 models, which will be available for the reduced price of $249. Consumers will also be able to purchase two AirSelfies for the price of $478. The first 3,000 pre-orders will be delivered in March of 2017, with the rest, including the power bank packages, being delivered in April of 2017.”

You can learn more on their Kickstarter page and here is a promotional video.