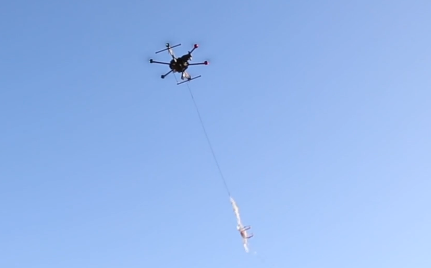 An emerging anti-drone company has a brilliant idea: to catch a rogue drone, release a hunter drone.

California-based Airspace Systems recently conclude a successful test of a hybrid system that marries UAV tracking software and sensors with a hexcopter on steroids. The Interceptor drone engages the target in a kind of dogfight, ultimately capturing its prey with a Kevlar net and carrying it away to safety. Oh, and by the way it does it all in mid-freaking-air. You have to see it to believe it.

“Our hardware and software are purpose-built for this challenge—and get better with every mission—so that you can protect your airspace with the tap of a finger,” the company’s website proclaims.

Airspace’s technology uses deep learning to detect aerial anomalies that fit the profile of an unauthorized drone. Once confirmed as a “bad-guy” UAV, Airspace software “releases the hound” and it’s game over for the rogue. The AI system can also predict a drone’s flight path.

Airspace CEO Jaz Banga believes that aerial protection systems serve as a much-needed stopgap by separating bad-apple drones from the good guys. Stupid people doing stupid things with drones could give the whole UAS community a black eye in the mind of the public.

“The consumer drone industry is one disaster away from ceasing to exist,” Banga said in a recent TechCrunch interview.

Drone mitigation is a natural consequence of the growing UAV industry: