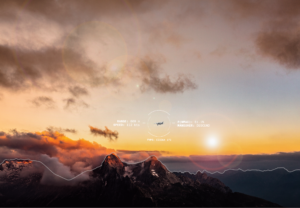 Making BVLOS Flight a Practical Reality: Onboard Sense and A…

As enterprise drone applications grow, the industry awaits a rule on flight beyond visual line of sight (BVLOS.)  BLVOS flight is an important concept for the growth of the commercial drone market.  Regulations allowing drones to fly beyond the range of a visual observer would make long range applications like inspection of railway lines or power lines practical, fast, and inexpensive.  True BVLOS flight would mean that an entire solar farm could be inspected while a pilot remained in one location – or that the entire inspection process could be automated, and possibly operated remotely.
BVLOS is something the drone industry has been waiting for.  Michael Huerta, then FAA Administrator told an audience in January of 2017 that a rule on BVLOS flight was one of his primary objectives for the year.  A rule has been slow to appear, however.  DRONELIFE spoke with Iris Automation CEO Alex Harmsen about Iris’ onboard sense and avoid technology – and building trust with regulators.

So far, the FAA has issued BVLOS waivers – but they are often not scalable operations beyond line of sight.   Some BVLOS waivers require ground radar along the entire flight path: others require that visual observers “daisy chain” along the route.  Some represent an “extended” range of operation from the operator, without realizing the potential of true distance operations.

Waivers that require multiple visual observers along the route or a ground based radar system, however, don’t actually help to evaluate potential operations like long line linear infrastructure inspections; or scalable package delivery.  The test scenarios are about building trust with the FAA; but in terms of the real commercial applications, Harmsen says, “They don’t make sense… they don’t solve the fundamental problem of making those applications more efficient.”  That’s a real limitation for the industry, Harmsen says: “The main reason that drones haven’t exploded in industry the way that people expect them to is that this problem hadn’t been solved.”

Onboard Detect and Avoid

If you don’t have a human being watching the sky, or install a ground-based system all along a flight route to identify birds, other aerial vehicles, and any additional air traffic: how do you ensure that drones will be able to avoid obstacles moving into their path?  The answer, says Harmsen, is an onboard detect and avoid system.  It’s a computer vision system that allows an unmanned system to “see” where it’s going, adjusting a flight path automatically to avoid conflicts in the way. Since it doesn’t require permanent infrastructure or additional staff, “We see this as the only scalable way to solve this problem,”  says Harmsen.

“It’s taken us about 4 and a half years to build and get approval for the systems that we’re working on now,” says Harmsen.  “It’s incredibly difficult, it takes a lot of upfront investment.”  Harmsen explains that drones flown within visual line of sight operate similarly to small manned aircraft.  “There is air traffic control around certain airports, but most of the airspace is Class G or Class E airspace – and we trust aircraft to fly wherever they want there, because we trust the pilots to see and avoid any other traffic.”

“That’s exactly the same things that our system does,” Harmsen explains.  “We’re looking at a potential 500 objects at a time and classifying them.” Detect, track, and classify – the system captures what a potential conflict looks like, how it moves, and then determines a classification: “It’s a lot more likely that we’re going to encounter birds than other aircraft,” says Harmsen.  “Then we do trajectory planning and take evasive action – and all of that happens in milliseconds.” 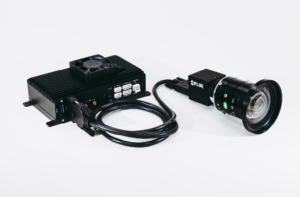 Iris Automation’s CASIA system is not only fast, it takes advantage of advances in the miniaturization of compute power – the system fits in the palm of a hand.  Additionally, says Harmsen, it installs in a couple of hours.  Designed for commercial drones that weigh between 10-55 pounds, CASIA is ideal for enabling BVLOS flight for a wide range of commercial applications.  “We are getting a lot of traction with railroad, utility, and pipeline inspections – long line linear infrastructure,” says Harmsen.  “Right now they do helicopter inspections, or do it by truck – but it’s very inefficient.  We also get a lot of interest from people doing large area surveys, and package delivery – when it comes to package delivery, unless you can fly BVLOS it doesn’t make sense,” Harmsen says.

Currently, Iris Automation is working with the Kansas Department of Transportation with an FAA BVLOS waiver: the company expects more waivers currently in the works to be approved within the next few months.  Iris is also involved with developing an ASTM standard for BVLOS flight.   These are all necessary steps towards making BVLOS flight standard.  “We’ve seen this same sort of scenario play out with other operations,” says Harmsen. “There may be a couple of initial BVLOS approvals that can set a precedent; then there is a standard that comes out from industry; then there is an official rulemaking.”

Efficient, inexpensive BVLOS flight will be a game changer for the industry – and Harmsen says that it’s now possible.  “There are other ways to get to BVLOS, but they’re just not scalable,” he says.  “There is a huge improvement in having a system onboard.”

“This is a time for us to raise the tide for the entire industry – so many people have been waiting for this.”