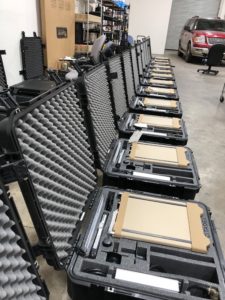 Counter-drone provider Citadel Defense is flying high, even as the tech firm tries to keep unauthorized zones out of the sky.

According to a press release, the San Diego-based company has experienced a surge in global demand for Titan counter-drone system, forcing Citadel to expand manufacturing capabilities for up to 50 Titan systems a month.

The company uses American suppliers with more than 70 percent of the components being sourced locally in Southern California. Over the past 18 months alone, Citadel has received orders for more than $17.5 million

“Designing agility into our product development process from the beginning has allowed us to move at the speed of the threat.  Rapidly deploying new, innovative, C-UAS capabilities that keep personnel, high-value assets, and intellectual property safe from unwanted drones has never been more important,” Citadel Defense CEO Christopher Williams said.

Citadel deploys the Titan C-UAS globally to protect combat forces, civilians, and critical infrastructure.  Titan detects drone controllers, video and Wi-Fi links for individual drones and swarms and can then neutralize the threat.

The solution is designed for easy set-up (about 5 minutes) and deployment for military, government or commercial use. Portability can especially be important for mobile military operations where drone activity can disrupt a mission.

“Designing our system to meet the needs of dynamic and unpredictable needs a real-world threat environment has been an important differentiator for our company,” Williams said.  “We use artificial intelligence to detect and defeat the broadest range of UAS threat scenarios in order to bring the most effective force protection to our customers.”

Share
Previous Making BVLOS Flight a Practical Reality: Onboard Sense and A…
Next Pandemic Drones That Can Detect Fever Will Take to the Sky