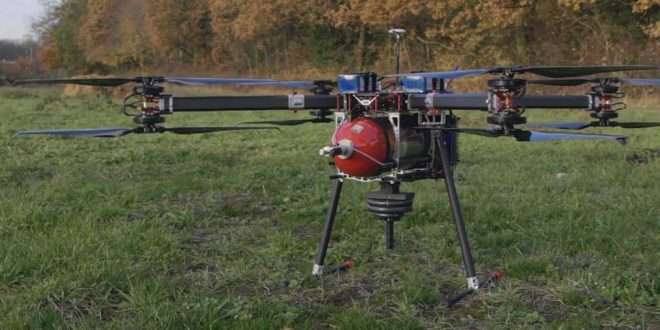 Last month we took a closer look at three technologies that will transform the drone operations of the future: The ability of drones to rest and recharge on the fly; advanced computer vision and motion planning, and hydrogen power.

One of the projects mentioned in our exploration of hydrogen was RACHEL, in which a UK-based group flew a 20kg multi-rotor drone powered by a hydrogen fuel cell for over one hour. The project was a collaboration funded by Innovate UK that was led by engineering firm Productiv with help from UAS videography company BATCAM and fuel cell provider Intelligent Energy.

We got in touch with Productiv and Intelligent Energy to find out more about the complexity and potential of hydrogen-powered drones. The comments below were provided by Intelligent Energy’s head of communications and PR, Debbie Hughes, and Productiv’s product strategy manager, Tom Donnelly.

Advances and benefits of hydrogen power

Hydrogen has a reputation as a futuristic power source, but Intelligent Energy, based in Loughborough, England, is one of several companies with solutions that are ready to go today.

The advantages of using hydrogen fuel cells to power drones are clear. They allow for a power to weight ratio that’s much more accommodating to longer flight times. And, if you can offer minimum downtime and quick refuelling alongside that, they are a compelling alternative to conventional sources of power.

According to Debbie Hughes, Intelligent Energy “now have the lightest and most power dense fuel cells available on the market.”

“Hydrogen fuel cell technology is here and now. Our products are currently available to UAV service providers, fleet operators and manufacturers and Intelligent Energy continues to design new and innovative products for the commercial UAV market,” she said.

Productiv’s Tom Donnelly explains how advances in both fuel tank and fuel cell technology have led to viable products the drone industry can use.

“The issues around hydrogen in the past have included the weight of the equipment needed to carry and use it. This has changed with the development of two critical components: the fuel cell and the hydrogen tank,” he said. “Intelligent Energy has developed extremely light-weight and efficient fuel cells, and the industry in general has been able to use modern composite materials to make very light tanks which will withstand the pressure required.”

Donnelly also suggests that the adoption of hydrogen power in the automotive industry has increased the amount of R&D in the space and there have been spill-over benefits as a result.

Project RACHEL culminated in a 20kg multi-rotor drone powered by a hydrogen fuel cell flying for over one hour. The research was supported by Innovate UK, a government funding body dedicated to UK R&D. Both Intelligent Energy and Productiv used the opportunity to push the limits of hydrogen-powered drone flight and provide a proof of concept to showcase to interested parties.

Much of the funding went towards commissioning bespoke components for a task that hasn’t been taken on before, including a cascade refuelling system developed by NanoSUN, another project partner based in the UK.

Productiv’s Tom Donnelly explains, “As with any new technology, many of the component parts are not available off-the-shelf, and need to be designed from scratch and manufactured as a prototype. In testing these ‘new’ parts present previously unknown issues that need to be addressed.  The test regime needs to be designed to reveal those issues so it means testing in as many applications and conditions as possible.

In the case of a drone, it is also necessary to develop and test systems for refuelling. This will be critical if the technology is to be adopted at scale.”

There seems to be a combination of hype, mystery and false information surrounding the potential of hydrogen power in the drone industry. We asked Intelligent Energy and Productiv which unexpected notions they had come across when speaking with potential customers about powering drones with hydrogen.

Debbie Hughes said, “One of the biggest misconceptions our potential customers have is that hydrogen is difficult to obtain. One of the first questions we get asked is ‘how do I get hold of hydrogen and how do I refuel?’

Hydrogen is readily available and Intelligent Energy can introduce you to several off the shelf, safe and practical refuelling solutions that meet the needs of your business. These could include a back to base compressor, portable solutions to take with you for off-grid refuelling or a back at base hydrogen generator. Unlike batteries, there is no significant downtime for re-charging. A cylinder refill takes a matter of minutes or you could swap your empty cylinder for a full one in just seconds,” she said.

Tom Donnelly said that Productiv spoke to many drone operators and clients over the course of the program and found that the issues of availability, cost and safety were all prominent.

“Availability has improved recently with the launch of a ‘Genie’ bottle which is a small, light-weight hydrogen bottle that can be ordered online and delivered directly,” he said.

“It is now no more difficult to purchase than barbecue gas. The cost is also far lower than many expect and is easily justified by the additional utility the fuel enables. Nearly everyone we spoke to was surprised when told this.”

A common concern is that hydrogen power is inherently a riskier option compared with conventional fuel sources. But that’s not necessarily the case. Lithium batteries and liquid fuel come with their own risks after all.

“In reality, says Donnelly, “hydrogen is safe when handled correctly. It is the lightest element which means that if there is a leak, the hydrogen will rise very quickly upwards and disperse rapidly. Liquid fuels tend to pool beneath the appliance which can cause a very hazardous situation.

Lithium batteries have issues around damage and can catch fire easily when punctured. There are also issues around the transport of batteries which affects their usefulness. Hydrogen, like other solutions, has issues which can be managed to an acceptable level.

It is important that we address issues such as safety. When we address concerns it helps to develop the market and increase manufacturing volumes which in turn will reduce costs. Batteries and liquid fuels are used without a second thought and there is no reason why hydrogen shouldn’t achieve the same status.”

Debbie Hughes also pointed to the solution’s safety record. “Hydrogen is non-toxic and is as safe as other fuels being widely used today such as gasoline and natural gas,” she said.

“Hydrogen can be handled safely when guidelines are observed and the user has an understanding of its behaviour. Over 50 million tons of hydrogen are produced every year and hydrogen’s safety record is excellent.”

Following the RACHEL project, Intelligent Energy supported South Korean liquid hydrogen specialist MetaVista at the end of January in a record-breaking 10 hour and 50-minute hydrogen-powered drone flight test. The company will be showcasing its UAV power products at AUVSI Xponential in Chicago later this month.