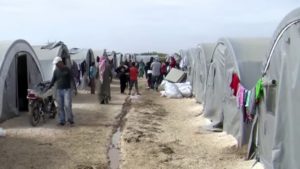 Drones in Journalism: Drone Footage Shows the Plight of Syri…

Drones have an important role to play in journalism.  If a picture is worth 1,000 words, an aerial picture is worth even more.  Drone footage can reveal size and scope in a way that ground-based photography can’t – and journalists using drones can communicate the reality of a situation sometimes faster and more accurately than governments.

Here, drone footage shared on Twitter shows refugees walking toward the northwestern Turkey to cross into Europe after an airstrike in Idlib. Nearly a million people have been displaced – Turkey has now reversed an earlier decision to close the border and will not stop the refugees from crossing into Europe, Reuters reports.

These sobering images bring home the plight of refugees everywhere and only a few years ago would have required the use of a helicopter –  which in many cases would have been impossible.  Drones are a less expensive and more available way of capturing the truth.

Irregular migrants are walking towards northwestern Turkey to cross into Europe after airstrike by Assad regime in Syria’s Idlib pic.twitter.com/BmoEzAQDn0