DJI Goggles – Will FPV be the Mavic’s Secret Weapon?

Previously DJI pilots have needed to use an FPV kit from other manufacturers, such as Fat Shark, to get an immersive, VR-like flight experience. The company’s decision to produce its own says a lot about this growing trend in the drone industry, which is by no means limited to FPV racers.

DJI Goggles look pretty similar to VR headsets you might have seen from Samsung of Playstation – the only real difference is that you’ll be getting a live feed from the Mavic’s camera, delivered in an 85-degree view at 1080p. The system is powered by DJI’s new OcuSync tech, which skips the controller out of the equation and feeds directly to the Goggles. This direct connection is supposed to reduce lag. A birds-eye view of the world is what aerial photography is all about, so it’s great that DJI is making the capability available to its new pilots. However, we’re not quite sure where the FAA stands on its use. The Part 107 ruling was pretty ambiguous surrounding FPV flight, so at the very least you’ll probably (legally) need to get a pilot’s license if you want to use the Goggles. Either that or you could just hand them over to a friend and let them enjoy the ride.

According to DJI, the Goggles “allow you to flick between third person view and FPV in under a second. You can comfortably wear your glasses while wearing the Goggles and quit FPV mode instantly by flipping the mask up.”

We’ve already gone into plenty of detail on the Mavic Pro, and why it looks like one of the best value options on the market right now. But its compatibility with DJI Goggles is another plus that maybe hasn’t received as much attention as it deserves.

DJI hasn’t yet released a price for the first person headset, but competitor Yuneec launched a similar product in August – SkyView – which is retailing at $250. We can expect a figure in the same ballpark. It’s another expensive accessory when you’re already paying a fair amount for a Mavic Pro (the only DJI drone the new Goggles are compatible with so far), but we guess there’s nothing quite like that FPV feeling. 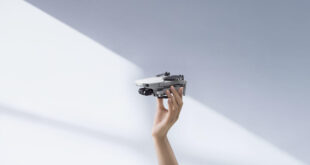 DJI’s tiniest drone, the Mavic Mini 2, can now fly up to six…