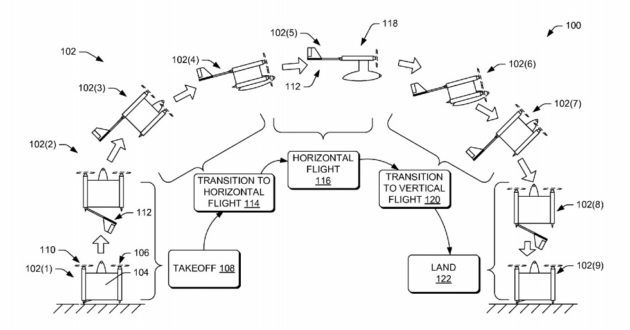 Mega-retailer Amazon continues to spread it corporate wings into the drone space, filing a patent for a new type of hybrid folding-wing design.

Judging from the patent, it’s clear the design fits perfectly into Amazon’s strategy to expand drone delivery markets. Under a section detailing the design’s function, the application reads: “The UAV may be configured to transport a payload (i.e., cargo), from an origination location, such as a fulfillment center, to a destination, such as a delivery destination.”

Upon takeoff, an Amazon drone’s wings would fold to enhance vertical stability and, once aloft, the wing’s aspect would flip and work like a regular set of propellers as explained in the application:

The patent is the latest in a string of Amazon filings to be made public over the last several months.

In October, the U.S. Patent Office awarded the retailer another patent design that could allow drones to “provide enhanced support for police during routine traffic stops [or]  to locate objects or people including, for example, locating a lost child in a crowd or a lost vehicle in a parking lot.”

Such a system would also include a pocket-sized drone equipped with image-recognition software and a voice-recognition module (similar to Amazon’s Alexa system). In diagrams, the drone is shown perched on the shoulder of a police officer ready to autonomously film a traffic stop.

In December, two more patents came to light – the first describing an “airborne fulfillment center” design (aka “flying warehouse”). According to the patent, a blimp-like aircraft would serve as a retail inventory storage unit for delivery drones. Another patent emerged the same month that describe anti-hacker systems for Amazon delivery drones.

Share
Previous Are Drones Allowed in National Parks? Great Sand Dunes Natio…
Next How to use a drone for aerial thermography