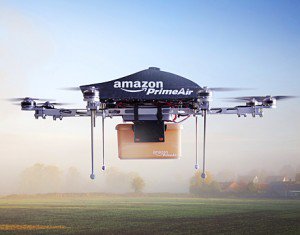 A current article printed on Recode.web speculated that the privatization of air site visitors management, as introduced by President Donald Trump earlier this week, might really velocity up drone integration – and the business purposes that may’t be utilized till it’s full, like drone supply.

“The proposal to privatize air traffic management comes as the FAA and NASA are studying how drones will fit safely into the national airspace. NASA has been working with the FAA to test and research a new system, with the goal of finalizing the project by 2019,” writes April Glaser of Recode.  “But if Trump follows through with privatizing air traffic control, a solution for national drone tracking might come even sooner.”

“Creating a way for drones to safely integrate into the national airspace is one of the biggest linchpins holding up the future of U.S. drone regulation and drone delivery more broadly, which has major implications for companies like Alphabet and Amazon, as well as traditional shipping companies like UPS that are readying for drone delivery.”

The article argues that taking drone integration out from beneath the FAA framework would possibly make it extra doubtless that an impartial ATC firm will select to purchase or contract an answer reasonably than try to construct one from scratch.  Additionally, separating integration from FAA processes ought to, in concept, velocity issues up. The concept is sensible, and it definitely has attraction to the drone business.

But in relation to giant authorities infrastructure initiatives, velocity is all the time relative. Drone analyst and business professional Colin Snow doesn’t see drone integration or drone supply coming anytime quickly.  Snow has written beforehand that drone integration has develop into an excessively advanced challenge: one that appears more and more tough to deal with because the scope broadens.  The President’s announcement received’t do a lot to alter that instantly.

“I don’t think privatizing air traffic control (ATC) would necessarily expedite drone delivery in the U.S.,” says Snow.  “There are two issues here: who runs ATC and who makes the regulations for beyond visual line of sight (BVLOS) operations. Under any scenario the FAA is the regulator. For BVLOS operations to occur a Federal Aviation Regulation (FAR) would need to be in place. Getting that rule in place starts a notice of proposed rulemaking (NPRM). An NPRM is a public notice issued by law when one of the independent agencies of the United States government wishes to add, remove, or change a rule or regulation as part of the rulemaking process…. If NASA’s UTM recommendations are released in 2019 it may be many months before those recommendations get incorporated into an FAA NPRM and another year or so before they become a FAR.”

“Many months” might be understating the case, given the FAA’s monitor file on issuing the Part 107 Small UAS Rule.  Additionally, Snow remarks, a non-public firm would possibly need to see clearer proof of demand than the present analysis offers earlier than investing money and time within the mission.

“Under a scenario of privatized ATC it still would be up to the company that runs it to determine what additional infrastructure would be needed for widespread BVLOS drone operations,” Snow factors out. “That firm would assess the potential revenue, costs, and return on investment (ROI). That’s not something the government does, but it is what every company does. That said, it looks to me to be a long way off because I don’t think the potential revenues from drone delivery alone would enough to support additional infrastructure.”

Whether or not Congress decides to denationalise the Air Traffic Control, in relation to drone integration there is no such thing as a fast repair in sight – and no apparent quick path to widespread drone supply.  While the drone business is rising shortly, purposes like drone supply could must develop in tandem with integration and laws for a while: a slower course of, however one which could give an sometimes uncertain public time to get used to the concept.

Miriam McNabb is the CEO of JobForDrones, knowledgeable drone providers market, and a fascinated observer of the rising drone business and the regulatory setting for drones. She writes for DRONELIFE on present information, monetary developments, and FAA laws. Miriam has a level from the University of Chicago and over 20 years of expertise in excessive tech gross sales and advertising and marketing for brand spanking new applied sciences.
Email Miriam
TWITTER:@spaldingbarker
Share
Previous West Point Cadets Show Off Drone Projects
Next It’s Official: Trump Plan Calls for Privatization of Air Tra…