Will Drone Tech Bring Ambarella Back? 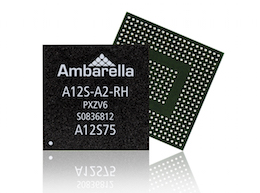 Ambarella, a manufacturer of image processing products, is one of those companies almost always named by analysts listing drone related stocks.  But in the last year, as Ambarella‘s stock – which hit a high of about $124 in 2015 and is now about $55 – has fallen and risen and fallen again to end up just about flat for the year, those analysts have tended to add caveats.

Part of the reason for this was Ambarella’s reliance on GoPro, it’s largest customer. “…because GoPro is by far Ambarella’s biggest customer, Ambarella shares tend to trade in lockstep with GoPro’s,” says US News Money. “Over the last year, that hasn’t been so great: GoPro’s revenue has been cratering, dragging GPRO stock (down 67 percent) and AMBA (down 20 percent) with it.”

GoPro’s problems – which began long before the recent Karma fiasco took over headlines -are old news, and Ambarella has suffered with them.  But despite a Thomson Reuters report last month that company sales would miss analysts’ expectations, it would seem that Ambarella has been making strides to expand their stake in drone technology, investing in development and expanding their market base.

“Ambarella’s strength in the drone market in particular has helped make it more of a multidimensional company and is helping to prop up gross margins,” says US News Money. “Its system-on-a-chip (SoC) technology can be found in the brand new Mi drones from Chinese tech company Xiaomi, released in May. DJI also uses Ambarella’s technology in its drones, and so will the GoPro Karma drone when it’s released later in 2016.”

Now Ambarella is introducing new products and advancements at this year’s CES show, which could put the company firmly back on track.  The company’s “flying camera” line will be enhanced with some new technology.  New chips designed specifically for drones include the H22, featuring electronic image stabilization – which would eliminate the need for a gimbal.  The H3 chip would provide 8K video;  the H1 would improve the video resolution for racing drones.   Noted drone journalist Sally French, also known as The Drone Girl, writes for MarketWatch that the new products offer significant advancements:  “… Ambarella’s product announcements provide insight into the direction of the drone marketplace not just this year, but in 2018 and beyond.”