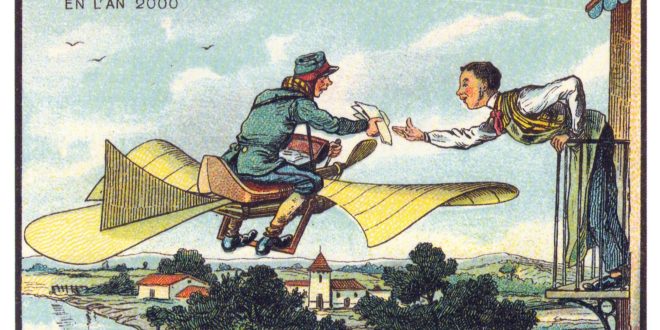 Which Country Will Be First to Deliver Mail by Drone?

It’s the season for delivery services to think hard about efficiencies.  Amazon announced their first successful drone delivery last week; this fall the USPS published the results of a public opinion survey on drone delivery.  But it looks like France may be the first to implement  mail delivery by drone.

An announcement by DPDgroup, a subsidiary of Le Groupe Las Poste, says  that  the French General Directorate for Civil Aviation (DGAC) has authorized them to deliver parcels using drones on a regular 15km (about 9 mi) route.

“For the first time worldwide, a regular commercial route makes it possible to deliver parcels by drone,” says the announcement.  “Once a week, the DPDgroup drone travels between Saint-Maximin-La-Sainte-Beaume and Pourrières, in south of France (Provence region). The route makes it possible to delivery items to a cut-off incubator of companies including a dozen start-ups specialized in technology…This represents a new way of addressing the issue of last-mile deliveries, especially when it comes to areas that are difficult to access.”

The delivery system will use a delivery terminal with an automated carriage system for departure and arrival of the drone.

DPDgroup has been testing drone delivery since 2014, in partnership with Atechsys, an commercial drone company based in the south of France.  The drone offers a range of up to 20 km carrying a payload of up to 3 kg, and can travel at a maximum speed of 30 km/hour (about 18 mph.)  The drone also features an automatic parachute, deployed in case of fall.

The plan is still subject to the official approval of transportation authorities in France, and is planned on an experimental basis.  But if successful, the test could introduce a new means of mail delivery across the globe.  Drones offer an opportunity to improve services to remote areas and increase efficiencies where traditional means of postal service are proving unprofitable.