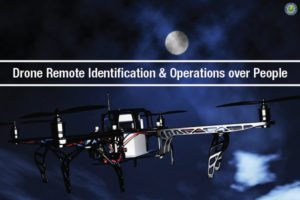 When Will Remote ID Go Into Effect? FAA Announces Date

The FAA has announced when rules on Remote ID will go into effect, along with the newly released regulations on drone Operations Over People and Moving Vehicles and Flight at Night.  In a press release published Friday night, the FAA says that the “final rules requiring remote identification of drones and allowing some flights over people, over moving vehicles and at night under certain conditions will go into effect on April 21, 2021.”That doesn’t mean, however, that pilots need to be immediately concerned about compliance with Remote ID regulations.  The rule gives manufacturers 24 months AFTER the effective date to include Remote ID on their aircrafte, and operators 36 months from the effective date to comply.

Wait – Didn’t We Already Talk About When Remote ID Will Go Into Effect?

Remote ID, Operations Over People, and Flight at Night were released at the very end of last year, and were expected to become effective on March 16 of 2021.  However, due to the change in administration, the government decided to postpone the effective date in order to allow the new administration time to review.  From the Federal Register:

On January 20, 2021, the Assistant to the President and Chief of Staff issued a memorandum titled, “Regulatory Freeze Pending Review.” The memorandum requested that the heads of executive departments and agencies take steps to ensure the President’s appointees or designees have the opportunity to review any new or pending rules. With respect to rules published in the Federal Register, but not yet effective, the memorandum asked that agencies consider postponing the rules’ effective dates for 60 days from the date of the memorandum for the purpose of reviewing any questions of fact, law, and policy the rules may raise.

In accordance with this direction, the Agency has decided to delay the March 16, 2021, effective date of the final rule, Remote Identification of Unmanned Aircraft (RIN 2120-AL31), until April 21, 2021. Given the highly complex nature and length of Remote Identification of Unmanned Aircraft final rule, this delay in the final rule’s March 16, 2021 effective date will afford the President’s appointees or designees an opportunity to review the rule and will allow for consideration of any questions of fact, law, or policy that the rule may raise before it becomes effective.

While Remote ID was the most complex of the new rules, Ops Over People and Flight at Night fell under the same category; so the three rules will become effective on the same date.  Pilots won’t have to wait 3 years to take advantage of Ops Over People and Night Flight rules, however, as the FAA statement makes clear:

The Operations Over People rule applies to pilots who fly under Part 107 of the Federal Aviation Regulations. The ability to fly over people and over moving vehicles varies depending on the level of risk a small drone operation presents to people on the ground. The rule allows operations based on four categories, which can be found in the rule’s Executive Summary (PDF). Additionally, this rule allows operations at night under certain conditions. Prior to flying under the new provisions, a remote pilot must pass the updated initial knowledge test or complete the appropriate updated online training course, which will be available on April 6, 2021….

The public can review both the Remote ID (PDF) and Operations Over People Rule (PDF) in the Federal Register.

For more information on these new regulations, pilots can call 844-FLY-MY-UA or email the FAA directly.