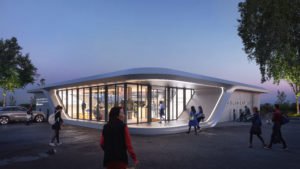 What Exactly is a Volo-Port? Skyports and Volocopter Announc…

Urban air mobility (UAM) is more than just a cool idea.  At drone conferences around the world, UAM is a hot topic as both regulators and communities seek for a way to address an increasingly significant urban problem: traffic.  For many cities around the world, adding transportation infrastructure on the ground is simply not an option – highways don’t have room for another lane.  There is, literally, no where to go but up.

Many such solutions have been envisioned.  Uber has presented its version: there is a drone taxi service currently operating – albeit on a very limited demonstration basis, rather than as an integral part of the urban transportation system – in Dubai.  But UK-based “vertiport” company Skyports, partnered with air taxi producers Volocopter, have announced that they will be first with a completed air taxi Volt-Port  – a landing pad for an electric vertical take off and landing (eVTOL) air vehicle.

All images featured in this article are provided by courtesy Volocopter and Skyports, and are protected by copyright. 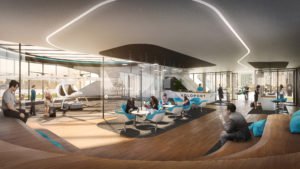 The following is taken from a Skyports and Volocopter press release.

Ground-based vertiport infrastructure is critical to the success of future urban air mobility (UAM), including air taxi operations in congested cities. Construction of the first Volo-Port will be completed later this year. The partners plan to build it in Singapore for the scheduled public flight trials in the second half of 2019. A full-scale Volocopter vehicle is on display at the GreenTech Festival. 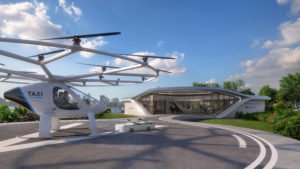 Vertiports are the only physical infrastructure required for air taxis to commence operations in cities in the near future. Volo-Ports are designed to provide passengers with a seamless air taxi experience that is safe, secure, and relaxing. They will merge with their surroundings, allowing passengers and passers-by to see through the whole structure.

Brandlab together with Graft Architects and Arup won the Volocopter international tender to produce the Volo-Port design. 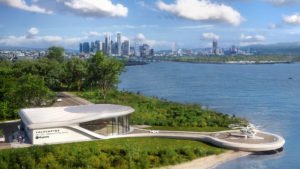 “Receiving the commercial license for air taxi aircraft is a question of time not possibility. We are thus focusing on shaping the necessary ecosystem around UAM including air traffic management, city regulation and the take-off and landing infrastructure. It takes visionary partners like Skyports and Brandlabs willing to make investments to actively shape the future of urban air mobility.”, says Alex Zosel, Co-Founder of Volocopter. “Once regulation comes through on the aviation and city level – and this will be sooner than most think – we will be ready to take off.”

“Each individual Volo-Port is designed so that it can stand alone or connect to other ports in numerous formations, enabling rapid deployment and scalability. We have analysed the available spaces and movement dynamics in city centres across the world and recognize that infrastructure is a key enabler for the emerging UAM market. We are delighted to be building the world’s first operational Volo-Port in partnership with Volocopter.” says Duncan Walker, Managing Director of Skyports.

“Mobility patterns in cities worldwide are changing rapidly – seamless transitions from one mode to another are crucial for transport efficiencies and changing passenger demands. Our design of the architecture, as well as all services along the whole customer journey, link ground to air infrastructure in the smoothest way possible. Passengers experience the connection to the sky through our design. We aim to build trust and create excitement.” says Linda Stannieder, Co-Founder and CEO of Brandlab.