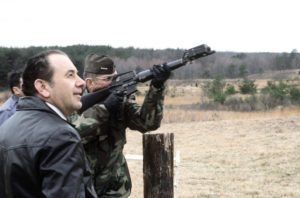 “The Big Problem with Small Drones (and How to Address It) is a new whitepaper by Teledyne FLIR Defense, part of Teledyne Technologies Incorporated (NYSE: TDY) on counter drone solutions. The whitepaper addresses the rising risk of weaponized small drones and concludes that successful counter drone measures must take a “multi-layered approach”.

Small drones are increasing being weaponized in order to carry out attacks on military targets.  “In January, non-state actors from Yemen utilized small unmanned aerial systems to launch deadly attacks in the United Arab Emirates that destroyed three refueling vehicles and damaged Abu Dhabi’s international airport. Other drone incidents in the Persian Gulf region include a 2019 strike on the world’s largest oil processing facility in Saudi Arabia,” says Teledyne FLIR.

The multi-layered approach referenced in the paper is modular, interoperable, and multi-domain – and would be able to detect drone swarms.  In addition, one of the key findings of the paper is that while the ability to detect, identify and assess drone threats in peacetime is one thing, systems must also be able to function in “contested territory” when adversaries might utilize electronic warfare to disrupt them.

The paper also finds that counter drone systems should be able to utilize both “hard” and “soft” drone mitigation systems, in order to be able to operate in compliance with local or national regulations which may prohibit one or the other methods of bringing down a rogue drone.

“There’s no ‘silver bullet’ when it comes to countering the huge risks presented by weaponized drones in the hands of bad actors,” said Dr. David Cullin, vice president and general manager of Unmanned and Integrated Solutions at Teledyne FLIR Defense. “What we’ve learned is that governments must address a host of challenges in concert to optimize their defense readiness in the face of UAS attacks.

“Nations around the globe are spending millions of dollars on commercially-built counter-drone solutions to address the immediate risks posed by these threats. But they need to approach the problem smartly, both from a technology and cost perspective. Our new whitepaper offers a number of insights from our team of experts,” Cullin adds.

‘The threat of small drones in the wrong hands promises to remain significant for government and military decision-makers as they seek to defend forward-deployed units, airports, power grids, and other critical infrastructure. Only the deployment of mature, flexible, and cost effective C-sUAS solutions will provide the required levels in protection as this threat continues to evolve at pace.”

Read more about Teledyne FLIR’s most recent innovation in thermal imaging for drones: