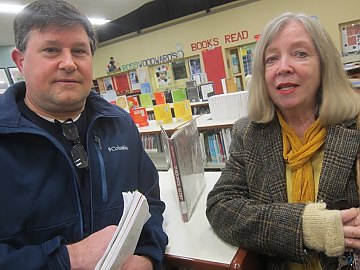 Will police-controlled drones be the city’s answer to solving the chronic and sometimes terrifying dirt bike problem?

And why is the city not incorporating into the budget-in-progress a Financial Review and Audit Commission (FRAC) recommendation for a $25,00- to-$50,000 study for an “operational audit” of the police and fire departments?

Wouldn’t that shed needed light on just how the police and fire departments can function well even in lean times, with maybe reduced manpower and maybe not sending fire engines to heart attacks?

Those questions emerged Tuesday night at the monthly meeting of the Quinnipiac East Management Team (QEMT) during a lively question-and-answer session.

The budget presentation was the latest in a series that the officials have made at neighborhood management team meetings.

The road show attracted attracted about 20 people to the library at the Ross/Woodward School, including outspoken gadflies including hopeful mayoral candidate Wendy Hamilton and activist Dennis Serfilippi.

Jones solicited the audience for any questions on “the people’s budget.” (Click here to read more about that.) 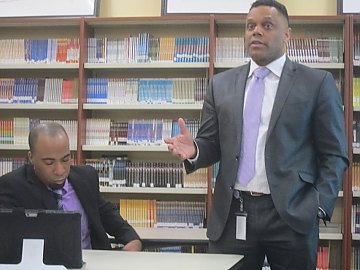 Hamilton stood and turned to the mayor, who had been sitting in the back of the room taking notes.

“Will you pledge not to raise property taxes?” Hamilton asked.

Hamilton pressed the mayor if she would put her commitment in writing. The mayor said she would, but cautioned, “If I do, some services may be cut.”

“But remember,” she added, “I proposed [a budget]. The alders approved.”

Serfilippi, who lives across town on Alden Avenue, raised two concerns. One was a FRAC recommendation to audit operations of fire and police services for efficiency.  The other was dirt and quad riding citywide, which, Serfilippi described as a scourge that the police are not solving. he said the menace makes it impossible for him to feel he can go out safely with his daughter.

“A year ago FRAC asked the city to look into the number of police [officers necessary], and the city didn’t do it. Why?” he asked

“We’re not a regular city,” replied the mayor.  “This is a city with a lot of poor areas. Until recently it was overrun with crime, and drugs. If you use a cookie-cutter” analysis —a mathematical formulation for number of officers required per population —“it doesn’t work.”

“I’m not buying it,” Serfilippi responded.

“An operational audit is not cookie-cutter,” Serfilippi continued. “They’d take into consideration the colleges. The city just hasn’t made the effort. I think the city police have done a phenomenal job, but it does follow a national trend.”

Coming to the mayor’s defense, Jones asserted that New Haven’s drop in crime is greater than that in Hartford, Waterbury, and Bridgeport.

“We also have 45 Yale officers who supplement downtown,” Serfilippi parried.

“It helps,” Jones conceded, “but this is to the New Haven police department’s credit.”

Why does New Haven have four assistant police chiefs? Serfilippi asked, Harp reminded him that the number was set more a decade ago at the recommendation of the Police Executive Response Forum (PERF), which released a study about how to restore trust in a department after a federal corruption investigation. “That’s something we take seriously,” Harp said.

Serfilippi raised his hand again. No other hands were raised, so Jones called on him again.

Serfilippi moved on to quads and dirt bikes. “What’s the police plan to handle them?” he asked.

“Our police department monitors them online. The meet-ups. We go there because we have a no-pursuit policy. We try to take the bikes,” Jones responded.

But people are furious, Serfilippi responded, because the policy in his estimation hasn’t worked. “If the city doesn’t have the resources and technology, call in the Sstate. I’m tired of not being able to take my daughter to Edgewood Park.”

Jones insisted that the city does have good technology and good data. Serfilippi questioned whether dirt bike incidents even appear on the data.

Serfilippi was more intrigued with initiatives that district manager Lt. Jason Rentkowitz highlighted as under discussion. One involved police-operated drones that might follow the fast-moving offenders (a suggestion first made a while back in the Independent comments section by New Haven cop Christian Bruckhart).

Rentkowitiz called it a creative idea with some potential problems. “It requires licensing and New Haven has a canopy of trees,” which might make airborne pursuit difficult if not dangerous, he said.

“Not a panacea,” Serfilippi agreed.

Rentkowitz said he and other district managers are working other ideas, including online monitoringL “Bikes are a priority. We’re going to amp it up. When you guys are frustrated, so are we. We’ll get there by summer.”

After the meeting the mayor said she could not recall the specific FRAC recommendation Serfilippi mentioned, but promised to look into it.

The average tree is 70 feet (according to research). Drones can legally be flown up to 400 ft; although, people fly them higher depending on where they are to make sure the drone does not interfere with aircraft (small or commercial). I fly my drown over the trees all the time while staying below 400ft, and I can maneuver it from one block to another in seconds. With speeds of 45mph up in the air, I am able to get from one location to the next in no time. The problem with Drones is the flight time is relatively short (30 minutes or so), and after a little over a mile from being away from the initial take off, it’ll automatically come back if the user doesn’t force it.

City of New Haven, just consult with people who fly these things on a regular and stop guessing. There are pros and cons. Drones will work in some cases, but it’ll be difficult. The drones that fly 100+ mph used in competitions, but their flight time is relatively short.

Two other important points with regards to this meeting.

1). We will hold a Townhall on Dirt Bikes (sad we have to say that) in mid-march to discuss the City’s plan to address the problem. Our elected officials will present their plan to the the public to address the problem. the NHPD wants to solve the problem but needs resources and support. So, we’ll get everyone in the same room (city and state elected officials), NHPD and State Police, and the general public can learn what the plan is and ask questions so we don’t need to go through another summer of chaos. the Mayor and NHPD have already committed to attending. We will invite the others. Date and time will depend upon the availability of the key players.

2. In Westville, non-violent crime rose 270% in January year over year, yet District 2 can’t get resources while the mayor has around-the-clock police detail. I asked the mayor why she needs police security at a time when crime is down, resources are scarce, and there is no specific threat? I asked if she would give up the resources. The Mayor responded by saying the security was recommended by the Chief (not sure if this was Campbell or Esserman) five years ago and she would ‘open the City up to liability if she gave up the police detail’. She would not commit to giving up the police detail even though she has the power to do so. We’ll need to ask the current Chief to explain if they believe the Mayor still needs the detail. And if she does, perhaps the City should consider using a resource other than a sworn NHPD offer, so our NHPD resources can be used in the field.

Yo Windy.. the Mayor and Jones just receive approval to borrow/ bond $160M to cover the next five years of any budget short fall. What a rhetorical question that received a standard pat answer. where have you been, under a rock??

They are hiding the $160M Fac by holding the peoples budget, which merely provides the cover for their budget shenanigans, which taxpayer start to fork up in year six of the bond .

Previous Delair Offers New Drone Platform Aimed at Construction, Mini…
Next Who are the defense innovators among the 2019 Fed 100? — De…