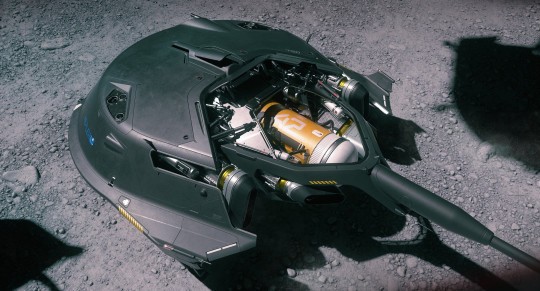 The design you see is known as the Parasite – Deep Space Drone. Its creator, Boy Sichterman designed this vehicle for the year 2197. Whether the future looks like this isn’t of much importance. What is important, like any other concept, is what sort of idea and possible technology does it flaunt.

As I mentioned earlier, the design is meant for deep space. This means it’s supposed to reach into the furthest corners of this universe while humans simply colonize neighboring planets. But what is something like this doing out in space?

Well, according to the designer’s ArtStation page, the Parasite is an asteroid mining drone. Honestly, as farfetched as this idea may be, if humans want to no longer deplete their planets of resources, asteroid mining is a wonderful alternative, and it being carried out by an automated device and system is the safest way to carry out such an action.

If you think asteroid mining, too, is a stretch on reality, think about that 16 Psyche asteroid that includes a core of solid gold, and that’s just part of the metals found on the prospect. Platinum, iron, and nickel are also found in abundance. But to get to it, humans need to reach an orbit between Mars and Jupiter. Just so you know, in case there’s an internet outage in your area, a fly-by from Earth to Jupiter takes anywhere between 550-650 days. Then you’re there mining for a few days, maybe weeks, then head back. Any idea what such a trip can do to a human mind and body?

Built in the image of a horseshoe crab, this drone is anything but parasitic. First off, it’s a decently large vehicle that could carry humans if ever required. Instead, that space is reserved for minerals and metals mined.

The surface of the drone includes only sensors and hardware used in navigating through asteroid fields. One feature that allows the Parasite to perform its duties is a quantum relay antenna that is meant to keep constant communication with command centers. Where this antenna is found, no mention is made. If I was the designer, I’d probably incorporate this feature into the tail. It seems perfect as an antenna.

Unlike other vehicles the future may bring, this one is not electric. Even though Boy states nothing directly pertaining to what sort of fuel is to be used, he does state the Parasite includes a forward-facing refueling boom, just perfect for planet-hopping all the way home, replenishing colonies with whatever goods were mined.

Once the drone finds that perfect asteroid it’s looking for, from the bottom of the ship, a pair of RCS-assisted harpoons are deployed as to latch onto to the surface, ensuring the vehicle stays put as it mines.

What I enjoyed about this project was the entire story behind the Parasite. Eight years after its deployment, a squad of 300 Parasite drones were responsible for the prevention of an asteroid impact with Earth. By latching onto asteroid 234 Ida, these vehicles managed to pull the object of course.

Again, it may be a long shot of a story, but think of it this way, there are scientist and engineers that are currently working on vehicles or tools to assist in asteroid trajectory corrections because this sort of situation can one day be a real threat.