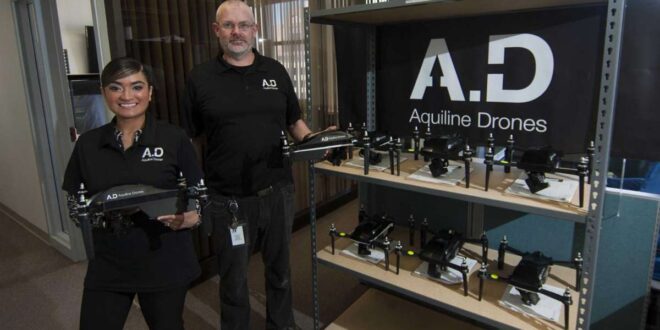 HARTFORD — In the downtown Stark Building, at 750 Main St., a team of 25 technicians builds flying machines.

Soon, there will be many more working there — and many more of those contraptions taking flight.

Aquiline Drones, the company that makes those commercial unmanned aircraft and provides supporting cloud technology and an array of other services, is growing quickly amid a surge in demand and concerns about foreign-made drones. For its home state, the firm offers the opportunity to take a leading role in a new era of aerospace — and a promising source of jobs in one of its cornerstone industries.

“There are so many things that we can do to make Connecticut more vibrant. What we have today is a new day, and Aquiline is spearheading that new day,” Aquiline founder and CEO Barry Alexander said in an interview at the company’s main offices, on the top floor of the Stark Building. “Aquiline is desirous and has taken active steps to make Hartford and Connecticut the drone capital of the U.S.”

‘Did not come out of nowhere’

Aquiline was founded in 2019, and the company describes the Hartford operations as the first drone manufacturing and assembly plant in the state. Officials at the state Department of Economic and Community Development said that they were not aware of any other drone manufacturers based in Connecticut.

While the company is still relatively new, its leadership comprises a seasoned group of professionals who have collectively worked many decades in aerospace, engineering and information technology. Newington resident Alexander has about 30 years’ experience in the aviation industry, formerly working as a commercial pilot who flew cargo around the world.

“We did not come out of nowhere. This has been in planning for quite some time,” Alexander said. “Being a very nimble company and having the technical acumen collectively really played a major role in our seemingly rapid ascension in the industry.”

Based on their extensive experience, Alexander said that he and his colleagues quickly grasped the potential of drones, which have become critical to military operations and are used for a range of civilian purposes such as surveying land and infrastructure, filming social and athletic events and making deliveries.

Today, drones represent the fastest-growing segment in the transportation sector — with more than 1.7 million drone registrations and 203,000 Federal Aviation Administration-certified remote pilots, according to the FAA.

“If you can look out the window and not see a drone, there’s more room for drones,” said Richard McGeary, Aquiline’s vice president of business development.

Aquiline does not publicly disclose its financial results, but major deals announced in recent months highlight its growth.

Last year, it signed exclusive U.S. manufacturing, sales and distribution licensing agreements with Drone Volt. The latter is a French manufacturer of professional civilian drones whose offerings include the Aquiline-produced Spartacus line. The five-year deal also entails the companies taking 10 percent ownership stakes in each other.

The bill would prohibit the federal government from purchasing drones manufactured in countries identified as national-security threats such as China and Iran. It was passed last year out of the Senate Homeland Security and Governmental Affairs Committee, but it has not yet been voted on by the full Senate and House of Representatives.

“I am very fearful that our adversaries will use drones as trojan horses to spy on our governments or critical infrastructure and even steal intellectual property from companies making new technology and valuable products,” Blumenthal said in an interview. “They are, in effect, an open invitation for our adversaries to use drone technology in surveillance and invasive information collection.”

Blumenthal added that “American companies like Aquiline are an example of what need to be supported and encouraged to make drones here.”

Today, 34 Aquiline employees work in the Stark Building, with four full-time contractors also based there. The company has leased about 17,000 square feet, with its operations in the building also including first-floor space for a drone showroom and sales.

Fifteen new technicians in manufacturing and production are scheduled to start on April 19, with another five set to join the sales team around the same time.

In addition, the company has 35 full-time contractors based in Argentina, Brazil, China, France, India and Ukraine who provide technical and advisory services.

Aquiline executives also see as a major job creator the company’s “Flight to the Future” online drone-pilot training and small-business program. More than 500 people are enrolled and more than 200 have completed their FAA “Part 107” licensing through the program, according to company data.

The firm is providing participants financing for the approximately $2,800 enrollment and purchases of drones. Price tags for smaller commercial models can range from several hundred dollars to tens of thousands of dollars.

Graduates can then get jobs, as independent contractors, through an app-based system run by Aquiline that the company describes as the country’s first “drone-on-demand” service.

“Think of the Uber model,” Alexander said. “These individuals are trained and outfitted with the hardware and everything they need to do the job. On a daily basis, when they activate the app, they see through a jobs board all the available jobs within a 50-mile radius of their location. The neat thing about the app is it ‘geo-updates’ as you travel.”

In the near future, Aquiline intends to expand beyond Hartford by opening a manufacturing facility at 1010 Atlantic St., in the South End of Bridgeport. It anticipates taking more than 120,000 square feet there, but it has not yet finalized an opening date.

“The more variables you have, the more complicated things get to be,” said Colin Cooper, Connecticut’s chief manufacturing officer. “But every time I talk with them and meet with them, they’re advancing on their objectives. Every time I come away from there, I’m both energized and exhausted because they’ve got so much going on.”

Aquiline’s growth could help Connecticut offset the job losses that manufacturing and every other major sector in the state suffered last year amid the economic downturn unleashed by the coronavirus pandemic.

About 152,000 worked in manufacturing in the state in February, down 5 percent from a year ago.

The company is not receiving any state subsidies, but Department of Economic and Community Development officials have been advising the company.

“We obviously want to focus on supporting our legacy businesses in the state, but we’re also looking to support growth sectors and businesses — and Aquiline falls into that category,” said Cooper, who is a DECD official.

Amid the pandemic-sparked trend of companies expanding in smaller cities and suburban markets, Connecticut is well-positioned to attract advanced manufacturers like Aquiline, according to state Sen. Joan Hartley, D-Waterbury, co-chairwoman of the state General Assembly’s Commerce Committee.

“Geographically, we were really up against the behemoths of New York and Boston. But that’s not true anymore. People want a different environment,” Hartley said. “And here we have a company in Aquiline that is in our sweet spot in advanced manufacturing.”

“It takes an entire business community, inclusive of government, to raise a company like Aquiline,” Alexander said. “With the potential to become the Silicon Valley of the northeast through what we do, let’s rally behind and provide Aquiline the support it needs to make that a reality.” 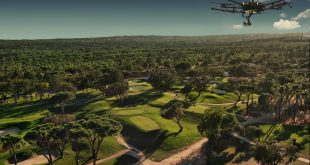 From drones to virtual reality: How golf is now a favourite …