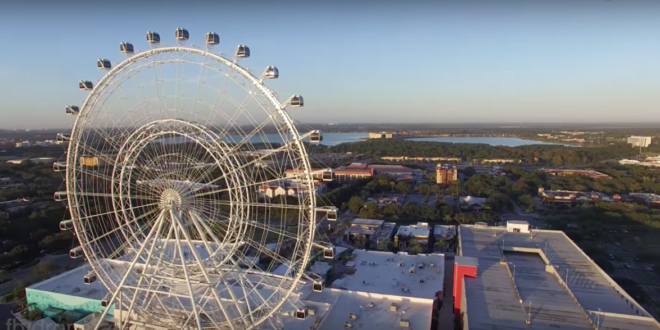 The city of Orlando announced yesterday a new drone law that requires permits for drone users. The law went immediately into effect on passing.

Violators who fly drones without a permit within the city limits will be subject to heavy fines. Also, jail time is possible for anyone operating UAVs under the influence (not a problem we typically hear about, but perhaps Orlando has its own challenges due to tourism and related issues).

The law seems to be aimed not so much at regulating drone flights in the city as at capitalizing on them, despite some cheery language:

“…the City wishes to increase the ability of hobbyists and commercial users to operate unmanned aircraft within the City of Orlando, while recognizing the need to protect the safety and privacy of the citizens and visitors to the city…”

Given how rich the city is with rides and attractions there are dozens of great aerial videos out there, like the one embedded below, with shots of the city. These may now be harder to make, and we may see fewer of them.

Details of the Law

Here are the details:

The catch to all of this is that the airspace over a city cannot technically be regulated by a city or local ordinance, but only by the FAA.

This article from On the Radar, a blog published by the Fox Rothschild law group, sums up the law concisely (the bolding is ours, not theirs):

One reason the FAA has blanket authority over all U.S. airspace is to avoid the confusion that would be caused if a pilot flying over multiple cities needed to need to be aware of dozens, if not hundreds, of local laws. Of course, the advent of drones have complicated all of this, but the law, and the distinction between federal and local jurisdiction, remains clear.

In fact, you could make the same argument for drone regulation as you might make for an airline pilot. As drone applications grow, it’s completely imaginable that drone pilots may fly operations that encompass multiple cities.

Indeed, they may need to do so right now—imagine a pilot in Florida surveying multiple orange groves for blight, or a construction company surveying multiple work sites. The possible use cases are many, when you stop to think about it.

Having to be aware of, and licensed or permitted in, each city a commercial drone operator happens to be passing through would be a mess of red tape.

Flight Over Orlando Isn’t Illegal, But Flying from Within Orlando Is

Although the city of Orlando cannot technically control what happens in the air (as explained above), they can still regulate what happens on the ground. This means drone pilots can be fined for taking off, landing, or operating a drone without a permit from within city limits, but not for the flight itself.

A careful reading of the new Orlando law reveals that the lawmakers were aware of their jurisdiction, although they may not have wanted to advertise the limitations to their authority when they announced the new law:

The Orlando law does not refer to flight per se, but instead reads that “It is prohibited to cause an unmanned aircraft to launch or land, or for any person to operate or assist in the operation of…” This is how every declaration of limitations regarding drones under the new ordinance starts, with those bolded words being the clear boundaries of what they can regulate. Flight itself is not mentioned within the law.

Meaning that, hypothetically, you could stand somewhere outside the city limits and fly a drone over Orlando without being in violation of the new law.

One last thing to note about the Orlando law, which seems to have been slipped in at the end, is that the ordinance notes that “all applicants for a UAS permit shall furnish proof of insurance of the types and amounts set forth by City Policy and Procedure.”

Does this mean you have to have insurance to fly a drone (or, excuse us, to launch, land, and operate one) in Orlando? It sure sounds like it.

And since the FAA has not yet mandated insurance for commercial drone pilots, this is one more step toward regulation, and possible over-regulation, that is important to note.

Why Should We Care?

Regulation isn’t necessarily a bad thing. The FAA has taken some great steps toward professionalizing the drone industry through issuing its Part 107 requirements.

But there are at least two big reasons why we should be alarmed by the Orlando law.

One reason is that commercial drone operations may span multiple cities. In fact, they may span multiple states. If pilots have to be aware of laws from one city to the next (that is, if every city goes the way of Orlando) the potential mess of red tape this will cause will put a serious damper to the expansion of the industry.

This is still true even if you don’t have to worry about being physically within the city limits, because, let’s face it, you still need to know that you’re not supposed to be within those limits, and that’s a lot of information to keep track of.

The other, related reason we should care is that up to this point drone pilots have presented themselves as a responsible, professional group of people. We are proud to be part of this industry. But if cities create unenforceable laws (and let’s face it, the new law in Orlando seems pretty unenforceable) with unrealistic expectations, the tensions between commercial drone operators and non-UAV folks (be they civilians, government entities, or local officials) may mount.

Compliance relies, in some part, on setting reasonable expectations. Paying to fly in every single city does not seem reasonable to us, and setting hurdles in front of commercial operators, who may be working within a very tight budget to begin with, simply sets drone pilots up for making a touch choice between ignoring the law and working to be in compliance despite very real hurdles to doing so.