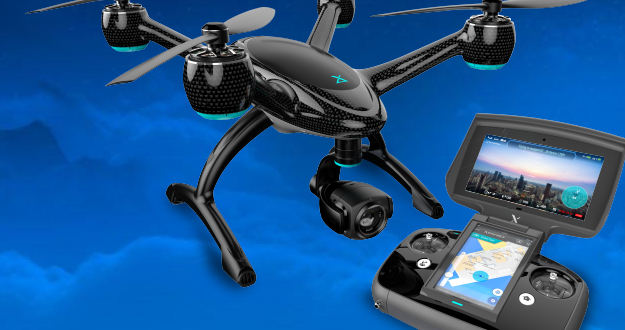 The annual tidal wave of technology developments is forming. Companies are prepping for CES 2017 in January. Drone technology will be in the mix as evidenced by a release from XDynamics, a Hong Kong firm, that has introduced Evolve, a consumer drone completed with a dual-screen remote controller. The dual screen design puts all kinds of industry-grade features and functionality at a user’s fingertips. XDynamics will showcase its high-end consumer drones at CES 2017 in Las Vegas, January 5 through 8.

Functioning as a 7-inch viewfinder and a 5-inch multi-touch control panel, the foldable dual-screen is complemented with minimal buttons and sticks, bringing an intuitive experience which draws inspiration from smartphones and digital cameras to handheld game consoles.

Embodied in an all-in-one package of hardware and software, Evolve remote controller is a smart pilot system (SPS) which combines all required functions for amateur and professional users’ flying and filming needs under a single interface:

Benny Chan, CEO of XDynamics concluded, “The remote controller is what differentiates XDynamics Evolve from competitors the most. It has everything prepared and covered. You need no separate apps, smartphones, and cables to assemble a full-function remote controller. Performance, reliability, and safety are within your reach.”

The Evolve drone delivers wireless live view performance with 1080p full high definition video at 60fps and transmission latency below 10 milliseconds. With zero latency transmission, filmmakers can monitor framing and composition in real-time, and never miss a critical shot. It is ideal for commercial TV and film production, infrastructure inspection, and other applications that require delay-free control of aerial camera.

The Evolve is a quadcopter with a carbon fiber chassis which provides better resistance to impact, stronger structural stability, as well as improved flight dynamics.

Equipped with a set of 21mm f/2.8 lens and Sony CMOS image sensor, with effective pixels of 12.4M, and supported by a 3-axis gimbal stabilizer, Evolve records smooth, high-resolution 4K video at 24fps, 2.7K at 60fps, 1080p at 120fps, and 720p at 240fps, accommodating to various scenarios and themes, from peaceful landscape to dynamic sport selfies. It supports RAW image file output (DNG format), and records video at 60Mbit/s.

In addition to the 4K camera, there are also options for mirrorless interchangeable-lens camera and panoramic camera, respectively supported by their own 3-axis gimbals, which can be attached and removed in less than three seconds without tools, thanks to the patented quick release gimbal adapter.

Our gut take on this: it is going to be expensive. It’s primary appeal will be to drone photo enthusiasts who currently use a Phantom 3 Pro or Phantom 4. The dual screen capability sounds good in concept but watching you drone and two screens at the same time might be a bit of challenge. Flying a drone this sophisticated takes coordination and skill. We also expect the carbon fiber construction to add to the cost. However, that might slightly improve upon flight times. It’s a product worth keeping an eye on.