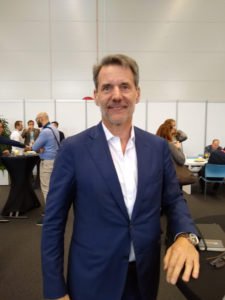 One of the great aspects of being present at the Commercial UAV Expo Europe, held this week in Amsterdam, is the opportunity to speak directly to some of the thought leaders in the global drone industry. DRONELIFE spoke with Marc Kegelaers: pilot, thought leader, CEO of Unifly, and an important player in the development of a global unmanned traffic management (UTM) framework.

Unifly and Unmanned Traffic Management Around the World

DRONELIFE (DL):  Can you please tell our readers a little bit about Unifly and where you fit into the global commercial drone marketplace?

Marc:  Unifly is a software company in the space that is called UTM, that keeps track of both manned and unmanned aircraft.  We’re solving a major problem: the conflict between manned and unmanned aviation.  About 5 years ago, I was almost killed by a drone.  I was flying at a low altitude and came within a few feet of a very large drone – his perception was that I nearly damaged his drone, my perception was that he nearly killed me!  We started the company in 2015.  When we started, drone use cases were limited: now everyone realizes that drones are part of the 4th industrial revolution. Drones will create jobs and create opportunities.  But if you want to do that, you have to solve the safety problem -that’s where we come in.

We’re a technology company, and we promote our technology typically to air navigation service providers (NSPs), those organizations responsible for the safety of the airspace.   We provide the technology that will enable them to integrate drones into the airspace without posing a danger [to other aircraft.]

One of the problems that NSPs have is that drone pilots aren’t manned aircraft pilots – they aren’t trained on all aspects of the airspace.  NOTAMs, for example, are just gobbledy gook – readable by pilots, but if you aren’t a trained pilot, there’s no way to understand them.  One of the things that we did very early on was just to provide information to drone pilots about where they could and couldn’t fly.

How Do You Create a Global System?

DL: There must be some customization that you have to do to work all over the world, right?

Marc: Yes.  There are two levels of what I call localization – first you have to implement the local rules.  We’ve created a technology that enables us to take legislation and put it into searchable database format, and that’s quite unique – it means that we can use the same backbone software, but change the database according to what country we are operating in.

The second part of the customization is about language – our system is fully functional, for example, in Japanese.

We built a lot of modularity and flexibility so that role-based permissions can be granted based on the person’s function and on their geography.  For example, you could give the mayor of a city permissions and he could see only what was happening in the airspace over his own city. It’s quite unique and powerful from that perspective.

The Concept of International Drone Flights

DL:  For US readers less familiar with UTM programs, can you tell us how your work in Europe is influencing global UTM development?

I am Vice President of the Global UTM Association and we keep track of what’s going on all over the world.  What we see is that intiatives that started on the left or the right are now coming together.  What I see is an architecture that will be very similar all over the world.

DL:  Everyone is asking about the speed in which global commercial drone applications will hit their stride.  How far away do you think we are from a global environment that would accommodate international drone flights?

Marc:  Well, I don’t think that we’re waiting for one single backbone spanning the globe.  I think that there will be a number of backbones that are interconnected.  And those backbones are being put into place – the largest that we are implementing right now, for example, is in Germany – and the neighboring countries, Belgium and Denmark are doing the same thing.  Backbones are being put into place.

DL:  Can you briefly explain the U-space initiative in Europe?

Marc:  In the US, you have one authority, the FAA, making the rules.  But in Europe you have many different authorities.  What Europe wants to achieve is to have one regulation about where you can operate drones, and one concept as far as UTM is concerned.  That’s U-Space – an initiative Europe is trying to establish a level playing field.  Much like NASA UTM in the states, the U-Space concept is being defined in a number of research programs, and we are in 10 of those research programs.  The most important may be CORUS (Concept of Operation of a EuRopean UTM System) which is four major NSPs, one UTM partner, one drone manufacturer and 2 research institutions came together to outline a framework for a UTM system.  That idea was been put forward to the drone community – over 700 pilots – and the result of that research program is a good framework for UTM in Europe.  Most of the other nine research projects that we are involved with test those concepts of operation.

While Europe moves ahead on implementing an international UTM framework, drone applications such as BVLOS flight and more complex systems such as urban air mobility are already moving fast.  By focusing on a system that allows customization by country but also enables communication and operation across borders, Unifly is establishing themselves as a world leader in the UTM space – and a significant force in assisting the momentum of the commercial drone industry around the world.