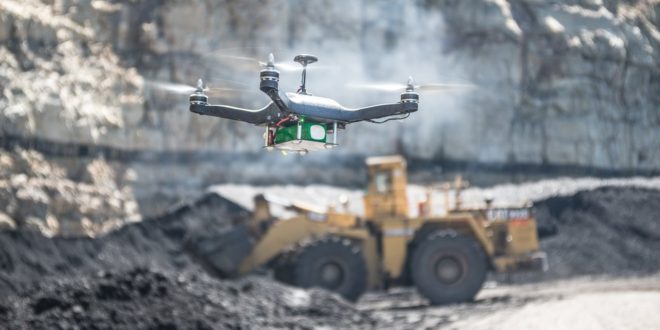 Loaded with state-of-art sensors and backed by unprecedented software analysis, drones are building a better future for the construction industry.

Goldman Sachs projects construction companies will lead the way in adopting drone technology with a myriad of uses from surveying new projects for defects to patrolling construction sites for bad guys.

According to a recent report by the Association for Unmanned Vehicle Systems International, the FAA had granted more than 1,800 exemptions to the infrastructure and construction industry, comprising 60 percent of requests across all sectors.

The survey also found 41 percent of the largest construction firms say they will very likely use drones in the future.

As the sector continues to bloom, several drone and drone-equipment players have made key strides in building on the construction boom.

The companies are marketing the package as “Triple D” bundles – mating a DJI drone with Datumate’s DatuFly tablet app and its DatuGram 3D photogrammetry software that converts images to high-precision, geo-referenced 2D maps and 3D models.

The University of Illinois team recently launched the “Flying Superintendent” – a set of predictive, visual data analytics tools, tasked with automating several tasks in the field of construction progress monitoring.

Like DJI-Datumate’s package, the Flying Superintendent integrates both images and videos shot by drones and “four-dimensional Building Information Modeling (BIM) to quickly identify and visually communicate the actual and potential performance problems during execution of construction projects via smartphones and tablets to project participants, on and off site,” according to a UI press release.

Far from just an academic effort, the team is working with Turner Construction to unleash the analytics powerhouse at the Golden 1 Center – the new home for the Sacramento Kings.

The suite creates 3D imagery, maps and measurements from images transmitted via drone and integrates them with full geographic coordinate systems support.

In addition, PhotoModeler can correct a drone-driven survey mission with GPS data for greater accuracy

In addition to launching innovative solutions, the drone industry is working with the construction and insurance industries to establish best safety practices. The Property Drone Consortium includes charter members Allstate, American Family Insurance, Auto-Owners Insurance, EagleView Technologies and Erie Insurance and Pilot Catastrophe Services. The PDC will develop “standards and specifications for the safe use of unmanned aircraft system technology in the insurance and construction industries.”

Share
Previous Sweden May Be Backing Up on Drone Ban
Next FAA Authorizations and Waivers: 3 Big Questions (And the Ans…