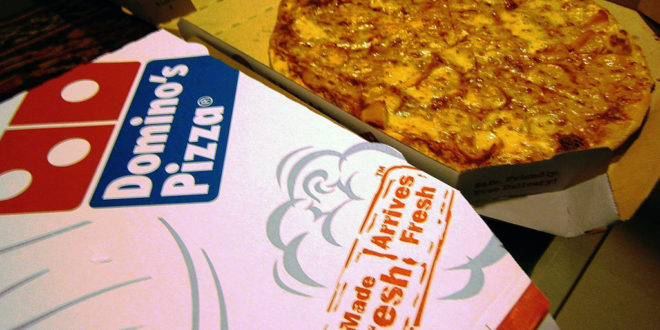 Domino’s is Betting on Drones to Deliver

There are 17 ways to order a Domino’s Pizza now, says a recent article in Bloomberg’s Gadfly; and keeping up with technology has proven to be Domino’s secret sauce. Now the company is betting on drones to deliver the same economic impact.

CEO Patrick Doyle tells Bloomberg that he “can remember when customers struggled to order pizza through sketchy dial-up Internet connections.” Now customers can order a pizza by asking Alexa for one or texting a pizza emoji.  All the investment in “digital orders” seems to be paying off: sales are on the rise, largely due to those digital orders; and Domino’s appears to be soundly outpacing the competition.

While Domino’s has always based its value proposition on fast delivery, and the company says that by investing in technology at a unified, corporate level the franchisees can focus on making pizza.  “…technology will increasingly determine the winners and losers among restaurants,” says Bloomberg.
“… restaurants that have dragged their feet on digital are paying the price.”

Having realized the benefits of investing in technology, Domino’s is now shifting its focus to its transportation infrastructure.  Transportation is  “one of the company’s largest costs and challenges,” says Bloomberg. Given that the problem is not limited to vehicles, but includes the high cost and difficulty in finding drivers.  These challenges make other delivery options – such as driverless cars and drone delivery – a critical piece of the company’s strategy moving forward.

Domino’s is currently testing drone delivery in New Zealand, completing their first successful delivery in November.  They’ve worked with drone delivery experts Flirtey, who completed a test of drone delivery with convenience store chain 7-Eleven earlier this year.  Domino’s goal is to get their delivery time down to a mere 10 minutes – and to significantly cut corporate costs in the bargain.

While drone delivery may be a year or two away from broad implementation, the technology is there awaiting regulations to catch up.  The profit motive for large chains is so strong that the pressure is building for the government to move on fully integrating drones into the airspace.  The iconic “pizza delivery guy” might well be replace by the “pizza delivery drone” sooner than we think.