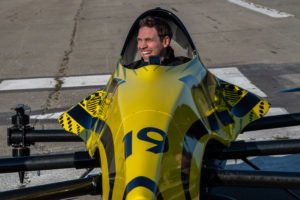 The second test of the Big Drone seen in Vrsar, Croatia on February 07, 2020.

Built to promote its Drone Champions drone racing video game, this drone is shown flying being controlled on the ground by a controller in the video below.  This is a full-sized drone, called the “big drone” is build with a carbon fiber airframe with 6 arms, each with a pair of coaxial rotors mounted at the ends and extending on a very sleek looking chassis.  While you have seen video like this before showing much smaller drones doing the extreme rolls and loops, this time it is a much bigger.

The unit is controlled on the ground by a pilot rather than in the drone itself.

The video was filmed in Croatia.  Now much of the video was filmed doing the extreme flying was filmed sans human (but with a dummy on board) but it is still impressive.  Later it shows a person on board but doing a much more sedate flight.  It does however show as a proof of concept with the unit flying with a person on board,  just no flips.    In this case it was Drone Champions founder Herbert Weirather who got the call.

“We have developed and built the first-ever manned aerobatic drone with the vision to create a brand-new future racing experience and to recruit drone pilots through DCL – The Game,” says Drone Champions founder and CEO, Herbert Weirather. “Everyone should have the opportunity to fly, and DCL – The Game provides a starting point.”

Below is an 8 minutes video that give further background and flights of the drone.

Share
Previous the ultra-long haul drones taking flight
Next “The Window of Opportunity is Narrowing”: Drones And Other U…