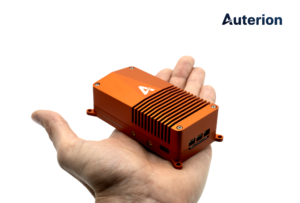 For the most part, software providers tend to stick to software.  Every once in a while, however, a pivotal moment comes in the development of technology – and the software providers have to build something just to demonstrate how it can be done.  Auterion Skynode is that something: “It’s the first hardware piece that really brings the internet as a first-class citizen into the drone,” says Auterion co-founder Lorenz Meier.  “Now, you have the compute on board that is required to attack more complex operations.”

“We’ve realized that every customer benefits most if the drone is constantly online,” says Meier.  “There are some exceptions with government products, but for the most part, having flight data online in real time – for predictive maintenance operations, and other applications – makes drones more useful.”

Skynode enables 4G on a drone: and it will only get better.  “It’s no coincidence that we’re building a reference design now,” says Meier. “5G will make connectivity a lot faster.  The speed on your smart phone or drone might outperform what you have in your building.  It will be suddenly incredibly easy to move massive quantities of data around – and that will enable some applications that have been problematic.”

Auterion’s mission is to make the leading open source platform for drones easily accessible to manufacturers.  Auterion Skynode is a reference design that allows manufacturers to take drones to the next level, and benefit from a platform that encourages app development.

“What is special about Skynode is that we were almost forced to manufacture it,” says co-founder Kevin Sartori.  “Auterion is a software platform -but we need really good hardware to work on.  We manufacture it, but we also license the design to other manufacturers.”

“We are working with a number of manufacturers that are building the Skynode deep into their design, so that it won’t be a box.   It’s like Android building a reference design so that many manufacturers can use it to develop a hardware product,” explains Sartori.

“Skynode will launch in four configurations: an enterprise module, a module certified for U.S. government users, the core board for tighter airframe integration, and a version built by launch partner GE Aviation with Run-time Assurance (RTA) for drone operations that go beyond what Part 107 allows and require special waivers. The Skynode design can also be licensed to Auterion customers to build their own implementations for even deeper integration,” says an Auterion press release.

“GE Aviation’s new RTA product, combined with the Skynode reference design, is available to drone manufacturers and operators and will help them meet regulatory requirements for a multitude of BVLOS missions and flights over people including commercial and humanitarian deliveries, mapping and inspections,” said Larry Martin, vice president of Avionics Systems for GE Aviation.

Scalability, and Enabling the Industry

Skynode represents a major change in the way drones can be used – a change that Meier likens to the development of smart phones.  “Around 2007, ideas were thrown around about smart phones– and Nokia laughed, questioning why you would want Internet on a phone when the screen is too small anyway.”

Meier is famous in the industry as the creator of Pixhawk, an open source autopilot system for drones.  “This is a single pivotal moment  – that’s changing everything,” says Meier.  “I’m disrupting my own creation.  I created an offline auto pilot – but that’s not good enough anymore.”

“Until now, drones have been a sensor in the sky – not connected to anything else except through very cumbersome processes,” says Sartori.  “Using Skynode, in terms of user experience, you just leapfrog over that.  Connectivity is one part, but the integration points are another: those SDKs, those cloud APIs, allow you to have a very scalable framework for integration.”

“There are a lot of apps for a DJI system, but many developers don’t know where to go next.  We’re able to bring applications and services to a broader market.  This is a way to deploy an IoT app very quickly and easily.  App developers will be able to do that completely separately from Auterion – here we are really providing the platform where other innovators can come in on top.”

That’s an important part of Auterion’s vision, Meier explains.  “We are looking at the long term value.  We care about the ecosystem of our platform.  We do everything we can to allow other companies to build on top of it.”

“Our ambition is not to be a drone company, but to enable the whole drone industry,” says Meier.

“Skynode includes a lot of connectivity, and you an keep adding a lot of links,” Meier explains.  “Even if 5G is not available in every area right now, you are going to be able very soon to add cheap satellite links.  That means that we will see completely new remote applications – and with that our vision of having drones constantly online,” says Meier.

Open source solutions can be ideal for government agencies: so Auterion has been careful to accommodate them.  Skynode is designed to be completely NDA compliant, made in Ventura County in the U.S. by a trusted manufacturer.  Inquiries about the use of the design can be directed to www.auterion.com/skynode starting today.