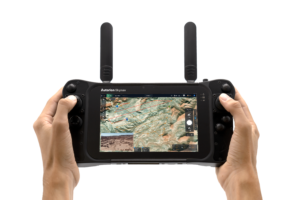 Skynav Gov can control any type of drone, including quadcopters, multi-rotors, VTOLs and fixed-wing vehicles, as well as unmanned ground vehicles.

In addition, Skynav Gov streamlines data collection from an expanding variety of sources, including day/night full-motion video, high resolution still photos and signals intelligence, as well as metadata with most any data stream.

Users gain the ability to see complex patterns and connections from a mass of data, providing a deeper understanding of how various forces impact each other.

Thanks to its open-source nature, Skynav Gov deploys widely accepted industry stands available via the hardware platform without being bound by proprietary restrictions of other government vendors. Skynav Gov is fully compliant with Section 848 of the 2020 National Defense Authorization Act.

Auterion is no stranger to government contracts – the U.S. Defense Department’s Defense Innovation Unit announced a $2 million project last year with the Swiss company to enhance open-source drone software. The partnership has the potential to standardize operating system’s for defense drone models as the Army expands its drone fleet.