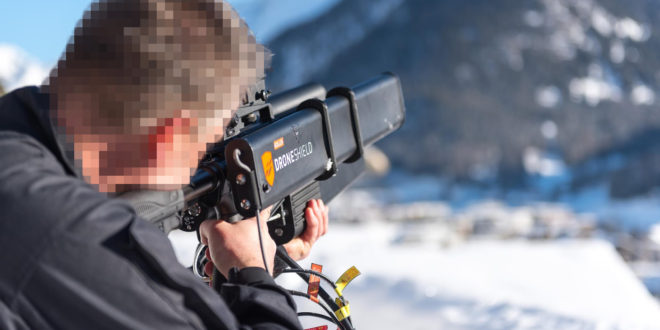 Canton-level police used DroneGun, a signal-killing device manufactured by American-Australian startup DroneShield that can drop errant drones and block video signals from their cameras, as well as DeDrone’s Drone Tracker system to monitor airspace above the forum site.

“The risks for high-profile events such as the World Economic Forum are many and varied. Organizers must be prepared against all dangers—even against drone attacks,” Dedrone CEO Jörg Lamprecht said in a press release.

“Because of the concentration of global political, economic and cultural leaders at WEF, it is one of the most protected events in the world,” a DroneShield spokesperson said in a media statement. “DroneGun was selected as part of a rigorous testing process, where the customer was looking for a non-destructive yet highly effective solution for the protection of the security and privacy of the high-profile delegates.”

Both companies have established a strong track record when it comes to creating No-Drone Zones at high-profile events.

DroneShield proved its mettle in a noisy, chaotic environment when it deployed drone detectors at the 2015 and 2016 Boston Marathon; the company has been retained for this year’s race as well.

In October, the Las Vegas Metropolitan Police Department hired DeDrone to provide both drone detection and counter-drone solutions during a presidential debate between Secretary of State Hillary Clinton and President Donald Trump at the University of Nevada, Las Vegas.

A recent study predicts the drone mitigation (or anti-drone) market will to grow to a billion-dollar industry within six years with predicted compound annual growth rate of 23.89 percent across 2017-22.