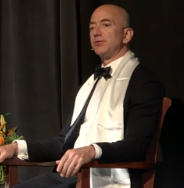 Amazon CEO Jeff Bezos gave more details on Amazon’s drone delivery technology on Saturday, during an interview at the 2016 Pathfinder Awards ceremony.  Bezos explained how drones will know where to land even in challenging environments.

Bezos gave details of how he expects the drones landing system to work.  “If you have a landing field, you can mark it with a symbol that you can print out with your printer and put it wherever you want the vehicle to land,” Bezos said. “It will come over, see it, and land. And if it sees anything that makes it nervous it can divert or phone home for help.”

“The vehicle is completely autonomous. It lands by itself, navigates by itself, and can fly more than 50 miles per hour,” he said. “It has a twenty-mile range, round-trip, and can deliver packages five pounds or less.”

The drone delivery program is being tested overseas in the UK, after Amazon failed to get an agreement with the FAA to test the drones here in the US.  Bezos lauded the move, saying that Amazon was getting “really good cooperation,” from the UK’s regulatory agencies.  US regulations currently do not support large scale drone delivery, due to rules prohibiting drone flight beyond visual line of sight (BVLOS).

Despite regulatory issues, Bezos is enthusiastic and upbeat about the project.  “It’s really extraordinary technology,” he said.  “It’s really cool.”

Previous Airnest’s Flight Logging Makes it a Complete (and free) Dron…
Next How to Find Work for Your Drone: Introducing the New JobForD…