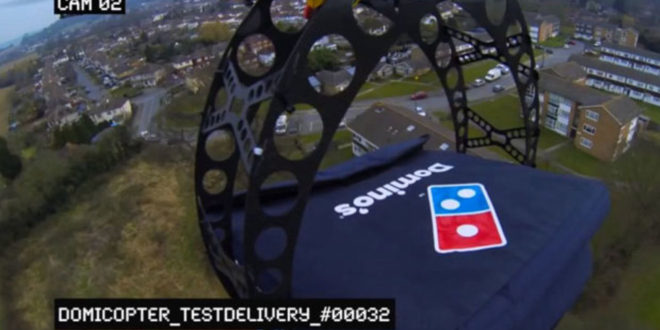 The Concept of Drone delivery
Drones came as a huge perfection to the Wright planes of last century. Organizations are now shifting their respective frontiers of modernization and making for the inception of the drone technology; a receptiveness that extends to the retail businesses. Drone delivery, a relatively new notion involves delegating a drone to do the task of delivering products to customers.
The technology has commanded the respect of great tech-based companies like Alphabet and Amazon, so much so that they describe it as the perfection of internet based commercial activities that involve goods delivery. As a matter of fact, a good number of organizations are already trying out the technology to ascertain its level of efficiency.

The DOMINO’S Pizza: The first shot at trying out the Drone delivery technology
On the eleventh month of 2016, a drone pizza delivery was made just before noon at Whangaparaoa, New Zealand, by DOMINO’S along with its business associate responsible for drone delivery Flirtey.
The navigation of the Flirtey drone was anchored by technical specialists and pilots who remotely control every step of the drone via GPS until the delivery is made.

Amazon sets out to test Drone delivery potency
Looking at the prospects of introducing drones as delivery agents in e-commerce does not happen with a small eye, it’s an ambitious look. Although drones had delivered pizza, Amazon hopes to perfect the technology in such a way that drone delivery would cost as minimal time as well as finance. The goal is to take advantage of its Prime Air delivery program and fulfill customer delivery in half an hour; an action that would beat their other Prime shipping and Prime now programs in terms of efficiency.

Now, when the cost of running a delivery using drones has been brought down, the customers, as well as Amazon, would have something to be grateful for. A Business Insider advance program, Business Intelligence, had estimated that in 2016, the average cost of a single delivery made by Amazon was almost $6. In addition to that, Seeking Alpha had predicted a huge possibility of the delivery cost incurred by Amazon reaching over $9 soon, and this does not sound well for most current shipping solutions when compared to the drone delivery option. Guess what? An investment organization, ARK, had made estimation that put the cost that would be incurred by adopting drone delivery at lower than $1. Now that means more savings for both marketing parties, that is, Amazon and its customers.

For this reason, in 2013, Amazon was spurred to release its Prime Air program to establish their position as early pioneers of the drone delivery. Amazon went on to experiment on the capacity of their drone delivery on two customers who lived within the vicinity of their e-commerce fulfillment center in the United Kingdom in 2016. Amazon, one of foremost e-commerce platforms, has also speculated a launch of the drone delivery in the United States no later than March during its AI conference.

The Merits and Demerits of Drone Delivery
Although the idea of drone delivery is great in itself and motivated by the need to improve e-commerce delivery solutions, it comes with its own merits and demerits. We take them one after the other:

Merits
Reduced cost incurred for delivery of the goods, and this is favorable as well to the customer who would, as a result, get to pay less.
Improved reliability and delivery time and customers would not want to wait for eternity to receive their items, hence making drone delivery a more efficient option.
The drone delivery technology enhances more savings for the organization at large.

Demerits
Just as Artificial Intelligence, in general, is a potential replacement for human workers, drone delivery would relieve a good number of individuals of their employment, since it’s a viable and possibly more effective substitution.
In that it works with GPS and cams in conducting delivery operations, customers could complain of invasion of their privacy.

What is there for Drone delivery firms in the coming years?
Indeed there is a future for drone delivery in retailing schemes. Business Insider also forecasts the future of drone delivery as a favorable one that would experience massive customer reception after 2020, but the revolutionary shift should not be expected any moment around now.

The regulatory body, Federal Aviation Administration, in the United States has permitted several experimentations on drone delivery and has even demonstrated much more permission for aerial construction site mapping, as well as monitoring of oil rigs. Although the FAA itself had set a huge challenge for the advancement of the technology in the U.S. because of its policy requiring pilots to see the drone they are flying. For this policy to hold, drone delivery would only be possible over short distances only. The challenge might also extend to China as well who are yet to issue a thorough set of policies to govern such UAV within its jurisdiction.

Asides the issues on regulations, there are also other specialized challenges as well that face the development of drone delivery technology worldwide. One such challenge is what delivery channels are most efficient and safe for drones. Questions pertaining to how the drone should conduct the delivery: whether to use parachutes or land in a section of the house and this would depend on the configuration of the homes, as well as the credibility of the customers.

There are also difficulties faced by drones in gaining widespread reception among customers. In fact, studies conducted by the U.S. Postal Service indicated that only 384 of 1200 consumers actually welcomed the idea of a drone handling the delivery of their orders. To buttress this unfortunate fact, many customers demonstrated mild contempt for companies that have chosen to adopt drone delivery solutions.

In the light of the foregoing, one would not agree less that it is a struggle indeed for the drone delivery technology. We can only remain hopeful that the worth of the drone delivery technology would be delivered soon to customers, and they eventually come to appreciate the technology. This evolution would definitely take a few years to play out, at least that is the same opinion held by many including Business Insider.

Previous Court Sides With Passengers Over The ‘Incredible Shrinking A…
Next FAA’s Huerta Emphasizes Partnership, Promises “A More Flexib…

Amazon Patent Shows Potential for Drones To Be Next Frontier… 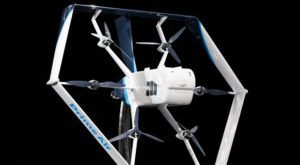 That Amazon Surveillance Drone Patent – and What it Really M…