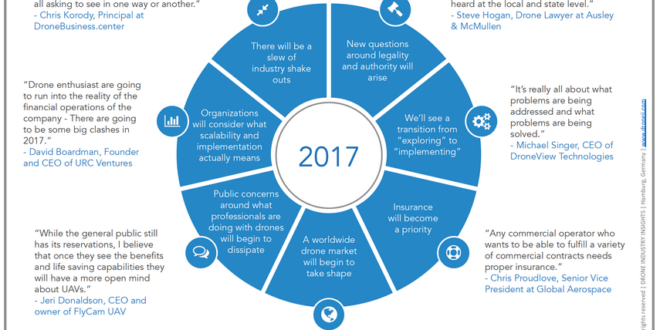 Many experts saw the 2016 rollout of Part 107 from the FAA as a watershed moment for the commercial drone industry as a whole. For a long time, organizations of all sizes stayed away from fully exploring UAV technology because of the hurdles and uncertainty associated with securing a Section 333 Exemption. Under Part 107 though, operators and organizations have a clear idea around how they can legally operate a drone for commercial purposes, and the threshold to do so has been considerably reduced. Part 107 might not have given commercial drone operators everything they wanted, but even the FAA’s harshest critics had to admit the rule provides the clear guidance and structure they had long been asking to see delivered.

Because of this development, 2017 is shaping up to be a critically important year. Professionals in oil & gas, construction, precision agriculture, process & utilities, mining & aggregates, law enforcement/emergency response/search & rescue as well as civil infrastructure are all looking at drone technology in a completely different light, but that doesn’t mean adoption is going to be a simple or easy task. There will also be challenges associated with sorting out what it means to secure proper insurance, changing public perception around commercial drone operations and what it means to scale a drone program.

Luckily, experts across the industry have insight around all of these items and plenty more. Their thoughts around what 2017 will mean to drone manufacturers, service providers, stakeholders and everyone else in the commercial UAV ecosystem provide an enlightening look at a year that could enable far-reaching growth and opportunity. A brief summary of each prediction is shown below. Click here to download the full report.

#1 New Questions Around Legality and Authority Will Arise

Many people assumed that Part 107 would resolve every legal challenge associated with operating a drone for commercial purposes, but that was never the real expectation or intention. Part 107 does not cover certain operations like flying beyond visual line of sight (BVLOS) or nighttime flying. Operators can go through a waiver process to receive approval around those kinds of operations, but that process in some ways represents a step backward. It’s something that Steve Hogan, Drone Lawyer at Ausley & McMullen as well as host of the Drone Law Today podcast, has already seen create challenges.

“The fact is that everyone and their brother wants to fly at night and BVLOS,” Hogan said. “Right now, each operator that wants to do something like that has to file a separate Part 107 waiver with the FAA. A rule that standardizes things for everyone will cut down on the waiver applications the FAA has to cull through, and will save agency resources.”

#2 We’ll See a Transition from “Exploring” to “Implementing”

As soon as drone technology became readily available to consumers, professionals in many different industries wanted to leverage the technology. What surveyor wouldn’t want to easily be able to capture an entirely different perspective of a site? Similarly, project managers envisioned how drones could be able to impact critical tasks like change detection.

That enthusiasm was something Michael Singer, CEO at DroneView Technologies, saw firsthand. Over the past few years he’s talked with hundreds of companies that were developing a curiosity around what drones could mean for them, and in many cases they even bought a drone to run some tests. The challenges they ran into centered on being able to derive value from them, which usually related to regulation and logistics. However, all of that has begun to change.

#3 Insurance Will Become a Priority

Concerns about what it means to operate a drone legally have been top of mind for commercial drone operators since the early days, but needs and requirements relating to insurance haven’t been as much of a priority. The reasons behind this are varied, but it’s safe to say recent regulation that defines what it means to legally operate a drone has changed the mindset for both operators and stakeholders. Motivations behind that change aren’t strictly related to regulation though.

“There has been a shift in mindset, but this has been primarily driven by the reality of operating a drone for a commercial endeavor,” said Chris Proudlove, Senior Vice President with Global Aerospace. “The growth and scope of commercial use cases has led to greater awareness around risk factors and this, coupled with companies’ general risk management procedures, means that any commercial operator who wants to be able to fulfill a variety of commercial contracts needs proper insurance.”

#4 A Worldwide Drone Market Will Begin to Take Shape

Part 107 might have redefined what it means to operate a drone for commercial purposes in the United States, but countries across the world are all at different stages in terms of how they’re regulating drones. What it means to legally operate a drone in France is different than what it means to do that same thing in Germany, and while that complicates the issue, the interest in the technology is there. Companies like Sky Futures have operated in 23 different countries, which is just a hint at the sort of worldwide opportunities that are and will soon become available.

Some of those opportunities are related to whether or not entities like the European Union (EU) are able to create regulation that goes beyond the border of a single country, and progress is being made. Kay Wackwitz is the CEO & Founder of Drone Industry Insights, a market research and analytics company based in Hamburg, Germany, and he has insight around how that process is shaping up, and also what it means for local regulation.

One of the biggest challenges that first responders and even industrial operators have around being able to utilize drone technology does not relate to the tools themselves. Instead, they face public scrutiny as members of the public express concerns about their privacy when they see a drone flying near them or their home.

These concerns and fears will begin to dissipate in 2017, not just because of the public awareness campaigns that are designed to specifically address these concerns, but also because drones will be able to create and showcase so many more benefits. Jeri Donaldson is the CEO and owner of FlyCam UAV, a UAV systems integrator and builder and the US distributor for a UAV that carries sensors that detect radiological, biological and chemical threats. These are the sorts of capabilities that will help the public understand why seeing a drone in the sky should make them feel relieved, rather than threatened.

#6 Organizations Will Consider What Scalability and Implementation Actually Mean

We already mentioned the transition from “explore” to “implement” that we’ll see from organizations in 2017, but what will that implementation actually look like? It’s a question that doesn’t have a simple answer, because implementation for an organization that does business in multiple countries and sectors looks different than it does for a company focused on a single region and in a single market. Being able to sort through those kinds of details is something that David Boardman, Founder and CEO at URC Ventures, sees happening in a major way in 2017.

“I think a lot of the drivers are going to be on the geographic scale of what you’re trying to accomplish,” Boardman explained. “If someone has a handful of high value mine sites, it’s going to be pretty easy to put a business case together to say that should stay internal and that competency should be built in-house. As you move to broader geographic scale though, that’s when suddenly the economics are going to be more challenging in terms of doing something in-house. Because then it’s a question of how many pilots you have, whether they can get to all the locations and fly at the frequency needed, etc.”

#7 There Will be a Slew of Industry Shake Outs

The recent acquisitions, mergers, pivots, sales and partnerships that we’ve seen in the commercial drone industry are just a hint at what’s in store for hardware and software providers. These sorts of deals will increase in 2017 and further define what commercial drone solutions are available, and what features they possess. Such developments are partly related to consolidation for market share, but as ever, it’s mostly an issue of economics. It’s something that Chris Korody, Principal at DroneBusiness.center, has looked at closely.

“The bottom line is that there are not many profitable companies in the drone space,” Korody said. “We know that VC investment is down and the F1000 tech company venture funds are for the most part only investing in small ($1-5M) chunks. On the other hand, companies that already have VC investment will only sell for a significant multiple. I think the more likely scenario, and perhaps a trend, is for someone for whom drones are an adjunct rather than a core business to buy a particular technology and the team behind it to round out an offering or reduce time to market.”

Jeremiah Karpowicz is the Executive Editor for Commercial UAV News. He has created articles, videos, newsletters, ebooks and plenty more for various communities as a contributor and editor. He is also the author of a number of industry specific reports that feature exclusive insights and information around how drones are being used in various markets. You can read all of those reports here. Get in touch via Twitter or LinkedIn.

Share
Previous The Best Apps for Your Phantom Drone
Next The DJI Mavic Pro: A DroneLife Hands On Review