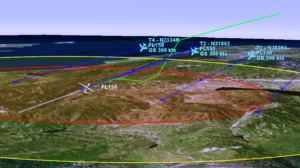 By obtaining a “special determination (known as a Commodity Jurisdiction),” Vigilant can send out the system without being classified as a “defense article” under International Traffic in Arms Regulations , thus not requiring a special license.

“We obtained this determination because we have received strong international interest in this product and are happy to announce that we will commence export of our product immediately,” said Kraettli L. Epperson, the company’s CEO.

FlightHorizon GCS is an airspace situational awareness and detect-and-avoid system that allows unmanned aircraft pilots to detect, track, predict and avoid other aircraft. The software sends self-separation and collision avoidance commands to the drone pilot to avoid conflicts quickly and efficiently.

Based on a patent and software developed at NASA, the system uses algorithms and flight rules to achieve safety and regulatory compliance when flying beyond visual line-of-sight.

The UTM system is installed on a laptop or workstation at the ground control station. It uses an ADS-B receiver at the workstation and a transponder on the aircraft to track the drone and all other nearby aircraft in real-time to provide situational awareness, traffic alerts, collision warnings and collision avoidance commands. When available, add-on data sources include ground-based radar and networked air traffic control feeds.

Recently, Vigilant released a list of all drones commercially available in the U.S. that can be flown beyond line-of-sight

In addition, the company teamed up with Oklahoma State University in December to launch one of the first BVLOS drone flights across a 13-mile long corridor in central Oklahoma after obtaining a special FAA Certificate of Authorization (COA).

The certificate allows OSU to waive rules requiring drone operators to keep their aircraft continuously in line-of-sight. The authorization is one of the few certificates – currently only 29 similar ones – and is the second one for OSU.

Share
Previous DroneLife Exclusive: The global UTM Market, India’s Impact a…
Next Fortem’s DroneHunter Turns DJI’s M600 Against Its Own