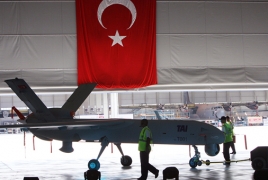 PanARMENIAN.Net – Turkey deployed swarms of killer drones to strike Russian-backed Syrian government forces, in what a senior official said was a military innovation that demonstrated Ankara’s technological prowess on the battlefield, Bloomberg reports.

The retaliation for the killing last week of 33 Turkish soldiers by Syrian forces involved an unprecedented number of drones in coordinated action, said the senior official in Turkey with direct knowledge of President Recep Tayyip Erdogan’s Syria policy. It was the first time a country had commanded the air space over such a large area using drone swarms, according to the official.

The series of strikes since Thursday by dozens of the remotely-controlled aircraft targeted Syrian bases and chemical warfare depots, the Turkish military said. But Turkey also located and destroyed some Syrian missile-defense systems, raising questions about the effectiveness of the Russian-made equipment intended to deter such air attacks.

“That’s something only Israel had been recorded publicly to have done until now,” Charles Lister, director of the Extremism and Counterterrorism Program at the Middle East Institute, said on Twitter, in reference to video footage taken by a Turkish drone allegedly showing the destruction of a Syrian army air-defense system. Turkey was waging an “air campaign run entirely by armed drones backed up” by heavy rocket artillery, he said.

The tactic threatens to bring NATO member Turkey into direct confrontation with Russia, adding to strains in relations between Erdogan and Russian President Vladimir Putin as they prepare to meet this week in an effort to ease tensions over Syria. The two leaders have worked together to try to end the Syrian civil war, despite backing opposing sides, but have repeatedly stumbled over who should control the northwestern Syrian province of Idlib that borders Turkey.

Russia dominates the skies over Syria as part of Putin’s military support of Syrian leader Bashar al-Assad, deploying advanced S-400 missile-defense systems to secure the air space while its warplanes aid Syrian forces battling to take the last rebel stronghold in Idlib. Turkish forces back the rebels and Ankara says it fears a fresh exodus of refugees flocking into Turkey if Idlib falls to Assad.