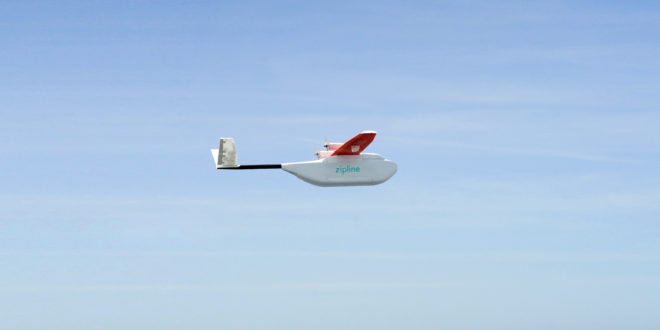 Zipline, the CA startup that has deployed the first medical drone delivery program in Rwanda, announced that is has raised $25 million in venture capital funding.  Investors included Andreessen Horowitz and Sequoia Capital; the recent funding round brings Zipline’s total funding to $43 million.

The Rwandan government has partnered with Zipline to delivery blood supplies to clinics in the rural western part of the country.  Zipline’s unique flyover approach – delivering packages by parachute – is particularly effective in inaccessible areas.  The cost is roughly the same as a traditional motorbike delivery, but far faster and more reliable to deliver critical supplies.  (The company says that delivery can often be made within 30 minutes of receiving an order.)

Zipline has an impressive leader in Keller Rinaudo, the co-founder and CEO of Zipline. A Harvard graduate, he is a software engineer with a formidable resume in working with computers build of RNA and DNA; he founded the robotics company Romotive prior to founding Zipline.   And Rinaudo sees the immediate future of drone delivery clearly lies in medical applications.

“Where this is really needed is health care. Doctors say as soon as you can solve this in Rwanda, you can get started in the U.S. because we have the same health care problems in rural areas with getting access to areas that are difficult to reach. It’s not burritos versus lifesaving medicine,” Recode.net reports that Rinaudo said Thursday at An Evening with Code Mobile conference taking place at Ericsson’s Santa Clara offices.

He could very well be right.  Drone delivery for Amazon and Google may be some time away, due to regulatory hurdles.  The FAA is reluctant to provide broad regulations that would address flight beyond visual line of sight (BVLOS) and commercial drone delivery on a broad scale would require a full integration of drones into the airspace traffic control systems.  That project is underway – NASA, the FAA, and other industry stakeholders are actively working on testing UTM, or Unmanned traffic management systems.  But medical applications of drone delivery, which could provide an immediate solution to an urgent problem, may get the green light from regulatory agencies in front of commercial applications.