Spanish Police Use Drones to Urge Citizens to Stay Indoors :…

While other countries use more conventional means to keep people in their homes, the Spanish Police use drones to yell at stubborn people who stay outside despite risks of infection from the coronavirus.

Some Spanish citizens seem to ignore the health risk or danger, as may still stroll about in a relaxed manner or standing around in public places. This, despite the advisories that they should not go out of their homes. A video footage posted by the BBC shows people walking freely outside their houses on a seemingly typical ordinary day.

The Spanish authorities have resorted to shaming and yelling at people through the drones equipped with loudspeakers. They release the drones and advise people who are still out of their residences. The drones with the speakers have the advantage of not having to avoid approaching people and risk transmission of the virus.

Spain has been put under a nationwide state of emergency since March 13, 2020. Police began ordering the citizens to stay inside their homes until the crisis has passed. However, people perceive this small allowance as an opportunity to take advantage of the crisis. This can be seen in footage of some police officers patrolling the streets and deploying drones.

Last week, the Spanish government ordered its 47 million people to stay at home and only go out for necessary trips, such as buying medicines, supplies, and food, and going to work. Spain has been the second worst-hit nation in Europe, next to Italy.

Spain implemented a quarantine and used drone technology to inform the people about the situation. Authorities also asked the public to wear masks and stay at home for their protection. The drones were used in specific areas of the Spanish capital, such as in Puerta del Sol and Segovia Bridge.

The novel coronavirus or SARS-CoV-2, which causes the disease known as COVID-19, has recently been announced by the World Health Organization or WHO as a pandemic. Scientists and countries have been racing to produce a vaccine and cure for the disease. WHO declared Europe as the epicenter of the COVID-19 epidemic. Tedros Adhanom Ghebreyesus, head of the WHO, urged nations to impose aggressive measures, mobilize the community, and implement social distancing to save human lives.

China has also used drones to watch its people and order them to stay at home.

As of the morning of Monday, March 23, 2020, the death toll of the coronavirus in Spain rose to more than double the number only within three days. Last March 20, 2020, 1,002 of those who tested positive for the disease had died, and on Monday, it has grown to 2,182, with confirmed cases is at 33,090. And as of March 24, confirmed COVID-19 cases rose to 39,673, with a death toll of 2,696. Despite the strict lockdown imposed during the recent weeks, the outbreak continues its surge. Aside from Italy, Spain is now considered the country that is affected by the worst. Pedro Sanchez, Prime Minister of Spain, said at a press conference that the country is “at war”. The current number of deaths was revealed by Carmen Calvo, Spain’s deputy Prime Minister, who also developed respiratory infection last Sunday and is now awaiting results after undergoing testing for COVID-19.

© 2018 NatureWorldNews.com All rights reserved. Do not reproduce without permission.

Previous Drones are the Ideal Tool for Keeping the Economy Moving Des…
Next Skybound Rescue Helping Parents Stuck in the House : the Res… 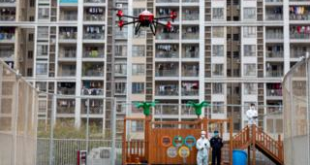 Coronavirus: Should the UK use drones to disinfect public sp…