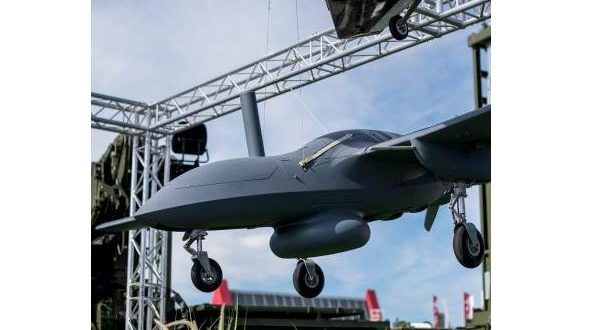 June 27, 2019  – Roselectronics holding company (part of Rostec) for the first time openly demonstrates the flight of the new reconnaissance drone Korsar. The premiere took place at the International Military-Technical Forum ARMY-2019 held on June 25-30 in Kubinka, near Moscow.

The Korsar drone system, designed by the Lutch R&D company of the Roselectronics holding, consists of several separate UAVs and a control station. The UAV is designed for all-weather aerial terrain reconnaissance, patrol and observation flights, and aerial photography. It weights 200 kg, has a wingspan of 6.5 meters and fuselage length of 4.2 meters.

Korsar can fly at altitudes exceeding 5000 meters, which places it out of the range of small arms and many types of man-portable air-defense systems. Its efficient engine allows the drone to make a continuous flight of up to 8 hours. The information gathered by the drone is processed and transmitted to the ground systems in real time.

“The system has been built on open architecture basis, which makes it easy to modernize it for solving specific problems. The design of the UAV uses innovative engineering solutions that provide it with advantages in terms of maneuverability, altitude and flight range. In particular, its power generation system, remote start-up of engines and electronic engine regulator surpass foreign UAVs of this class in several parameters”, said Oleg Yevtushenko, the Executive Director of Rostec.

In addition to military use, Korsar can also solve civilian tasks such as environmental, traffic and infrastructure monitoring, forest fire prevention and emergency search and rescue operations.

Rostec is a Russian State Corporation that was established in 2007 to facilitate the development, production and export of high-tech industrial products designed for civilian and military applications. The Corporation comprises over 700 organizations that are currently part of eleven holding companies operating in the military-industrial complex and three holding companies working in civilian industry, as well as over 80 directly managed organizations. Rostec’s portfolio includes well-known brands such as AVTOVAZ, KAMAZ, Concern Kalashnikov, Russian Helicopters, UralVagonZavod, etc. Rostec companies are located in 60 constituent entities of the Russian Federation and supply products to the markets of more than 100 countries. According to Rostec’s strategy, the main objective of the Corporation is to ensure that Russia has a technological advantage in highly competitive global markets. Rostec’s key objectives include the introduction of a new techno-economic paradigm and digitalization of Russian economy.

Disclaimer: The views of authors published on South Africa Today are their own and do not necessarily represent the views of South Africa Today. By viewing, visiting, using, or interacting with SouthAfricaToday.net, you are agreeing to all the provisions of the Terms of Use Policy and the Privacy Policy.
Share