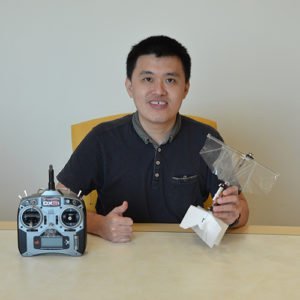 Researchers Develop a Drone That Flaps Its Wings Like a Swif…

When we think about a drone, we think about raptor wings cutting across blue skies or dragonfly rotors buzzing high over a cityscape. But flapping? Like a cardinal? Or a crane? What a bird-brain concept … or is it?

According to a research team from Australia, Singapore, China and Taiwan, the concept of a flapping drone is soaring into reality.

Led by National University of Singapore research scientist Yao-Wei Chin, the team recently published a paper in Science Robotics about a drone prototype that mimics the flapping flight of the swift – one of the world’s fastest birds.

The international team of aerospace engineers developed an ornithopter – flapping-wing aircraft – weighing in at a wispy .05 pounds. The tiny drone can easily navigate crowded areas. It can glide, hover and stop quicker than quadcopters, the researchers say.

“There are existing ornithopters but, until now, they were too inefficient and slow to be agile. We have overcome these issues with our flapping wing prototype, achieving the same thrust generated by a propeller,” UniSA aerospace engineer Javaan Chahl said.

“Flapping wings can lift like an airplane wing, while making thrust like a propeller and braking like a parachute. We have put this together to replicate the aggressive flight patterns of birds by simple tail control.”

The drone can be used for surveillance and pollination of indoor vertical farms, Chin added. He also hopes to see the flappy drone used at airports or farms to chase away birds.

“The optimized ornithopter acts as a kind of scarecrow, greatly saving on labor costs for pest control companies and airport operators,” he added.

“By improving the design so ornithopters can now produce enough thrust to hover and to carry a camera and accompanying electronics, the flapping wing drone could be used for crowd and traffic monitoring, information gathering and surveying forests and wildlife.”

The flapping drone still has a long way to fly before it can truly mimic a swift. The avian speed demons have been clocked at speeds up to 90 mph.

“Although ornithopters are the closest to biological flight with their flapping wing propulsion, birds and insects have multiple sets of muscles which enable them to fly incredibly fast, fold their wings, twist, open feather slots and save energy,” Chin said.

“Their wing agility allows them to turn their body in mid-air while still flapping at different speeds and angles.”

Designing drones to mimic birds or insects isn’t a new concept. MIT engineers created an autonomous, wind-powered glider drone that mimics an albatross’ flight and can survey hundreds of miles of ocean surface.