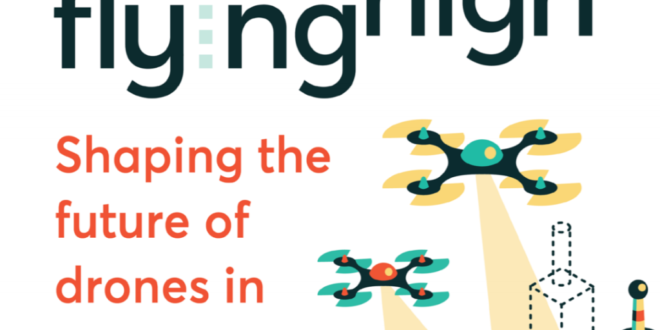 Report: UK has golden opportunity to shape future of drones

As part of the UK government’s Industrial Strategy, innovation foundation Nesta has been exploring potential urban applications for drones as part of a pilot project, the Flying High Challenge.

Nesta has been delving into many of the use cases we’ve seen elsewhere in the industry, including medical deliveries, traffic incident response, supporting firefighters and construction.

Over the past six months the organization has been working with five city-regions in the UK: Bradford, Preston, London, Southampton and the West Midlands. Participants in the investigation include the National Health Service, the police and fire services, central government, technology experts, industry leaders, academics and regulators – all of whom have been asked to weigh in on the technical feasibility, social and economic advantages of each use case.

There are six key findings from the report that we’ve picked out.

“The cities we worked with are keen to take advantage of drones to perform things more quickly or more safely than humans can and reap potential cost-savings. They are also motivated to support local R&D of drone enabling technology to promote regional and national industrial strengths,” says the report.

“In each city, we heard from people excited by the many interesting things drones could do – from carrying parcels to providing entertainment to searching for missing persons – but they were also concerned about the safety of drones flying overhead and if they would invade their privacy or disrupt their views. Cities are eager to shape this technology – with robust public engagement – to promote the greatest possible social good.”

“The technology already exists to allow drones to do many useful things in cities today – in isolation. However, we will never fully realise the economic and social benefits unless technology, infrastructure and regulations evolve to enable complex, autonomous drones to work together safely in our urban airspace – in a way that responds to what people want.”

“Cities are starting to think about what drones should and should not do, but so far the general public has played very little role. There is support for the use of drones for public benefit such as for the emergency services. In the first instance, the focus on drone development should be on publicly beneficial use cases.”

“In complex environments, flight beyond the operator’s visual line of sight, autonomy and precision flight are key, as is the development of an unmanned traffic management (UTM) system to safely manage airspace. In isolation, these are close to being solved – but making these work at large scale in a complex urban environment is not. While there is demand for all of the use cases that were investigated, the economics of the different use cases vary: some bring clear cost savings; others bring broader social benefits. Alongside technological development, regulation needs to evolve to allow these use cases to operate. And infrastructure like communications networks and UTM systems will need to be built.”

Positive noises from government and industry

The UK’s Aviation Minister Liz Sugg, said the Flying High project “is a fantastic example of how much drones can help us in our daily lives.”

“Drones have the potential to bring great social and economic benefits to the country and we want the UK to be a global leader in drone services. We have begun introducing a world-class legal framework to ensure this exciting technology is used safely and responsibly to help the industry thrive.”

Andrew Tyrer, Challenge Director of Robots for a Safer World Challenge, (Innovate UK), said “The five city projects under the Flying High Challenge are all excellent examples of the potential for drone technology to make a real difference to our everyday lives. This important report clearly sets out the challenges involved in delivering the vision for drone utilisation in city landscapes, and also points out the huge potential for UK companies and organisations to seize these exciting opportunities.”

And finally, Professor Tony Young, national clinical lead for Innovation at NHS England – the body that could one day be using drones for medical deliveries in the UK – said, “We want to harness the massive potential of technology in the NHS to deliver improved patient care and the use of drones offers exciting possibilities. As the NHS develops its long-term plan we will be looking at the use of technology now, tomorrow and into the future to ensure we can take advantage of all the benefits new innovations can bring.”

You can read the full report online here.