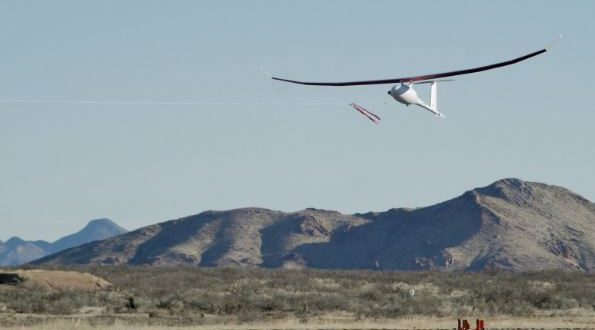 A fixed-wing drone backed by DARPA soared into history books last month after achieving a world-duration flight record for drones in its class.

Manufactured by Vanilla Aircraft, the diesel-fueled VA001 flew for nearly 56 uninterrupted hours at an altitude of 6,500 to 7,500 feet after being launched on Nov. 30 from New Mexico State University’s Unmanned Air Systems Flight Test Center.

The National Aeronautic Association certified the flight as “achieving the world duration record for combustion-powered UAVs in the 50 kg-500 kg subclass (FAI Class U-1.c Group 1),” according to a DARPA press release.

DARPA officials say the flight also captured record for the fourth-longest flight for any unmanned aircraft. The drone could possibly have smashed more flight records – a 120-hour flight was planned – but the aircraft had to be grounded early on Dec. 2 due to incoming bad weather but still carried a half tank of fuel.

“This effort represents tremendous and unprecedented coordination among civil, defense, academic, and private industry to bring a heretofore only imagined capability to reality,” Vanilla Aircraft CEO Timothy Heely said in a media statement.

The VA001, a joint development of DARPA and Vanilla, hauled 20 pounds of actual and simulated payload and company officials say the drone is designed to handle a 30-pound payload for 10 days at an altitude of 15,000 feet. A portion of the payload included a NASA multispectral imaging payload as “a demonstration of Earth science and agricultural remote sensing.”

“The VA001 would be a cost-effective option for widespread and regular low-level surveying. We could fill a wide cost and payload-capability market gap between small electric and large military unmanned aircraft, which is perfect for many commercial applications,” Vanilla co-founder and program manager Jeremy Novara said.

“This record-breaking flight demonstrated the feasibility of designing a low-cost UAV able to take off from one side of a continent, fly to the other, perform its duties for a week, and come back—all on the same tank of fuel,” Ledé said.

The successful flight is just one of several victories in 2016 for Virginia-based Vanilla Aircraft. In May, the company won Startup Showdown at the Xponential conference before a panel of top-flight venture capital judges.

Share
Previous senseFly to Explain the Cost and Process of Drones in Agricu…
Next Jobs in the Drone Industry: Who Gets Hired, and Why?